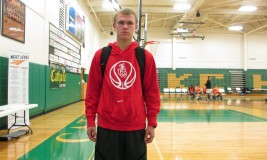 The action was tough and competitive as the Rocky Top High School Fall League tipped off this past weekend at Grace Christian in Knoxville. Lets take a look........

Team Holt puts their unblemished mark on the line this Saturday at Grace Christian as they tangle with divisional foe Team Steinmetz (0-1). Team Lawhon looks to get back on the winning track as the tangle with an unbeaten Team Watts (1-0).

Balanced scoring seemed to be the trademark as Team Matthews looked to defend their championship with an 82-75 opening game triumph over Team Garman. Depth proved to be the difference as Matthews put 5 players in double digits led by 14 each from Austin Shrum (Upperman) and Colton Blevins (York Institute).

Team Matthews welcomes a formidable challenge with Team Feltner (0-1) taking the floor at Grace Christian this Saturday. Team Garman will battle unblemished Team Sharp (1-0) as they look to bounce into the win column this Saturday.

Conley Hamilton (Powell) scored 16 and helped hold off a furious Team Steinmetz comeback as Team Jeffers comes away with a 76-69 win in opening day action at the Rocky Top Fall League.

Jacob Cawood (Midway) and Stephen Butts (Scott) led Team Steinmetz with 15 points each. Maverick Smith (Oakdale) chipped in with 10 in the narrow loss.

Team Jeffers welcomes Team Coffin (0-1) who will be set to knock them into the ranks of the beaten this Saturday at Grace Christian. Team Steinmetz looks to bounce back against powerful Team Watts (1-0) in Saturday action.

In one of the most competitive games of the day, Team Sharp gets 21 markers from Seth Shaffer (Sequoyah) and 15 from Jai Atkins (William Blount) as the boys from Blount County edge a surging Team Driscoll 65-58 in Rocky Top Fall League action this past Saturday at lovely Grace Christian.

Kenaan Berger (Heritage) and Dalton Price (Maryville) chipped in with 12 and 11 respectively for the winners, who will take on Team Garman (0-1) this Saturday at Grace.

Team Driscoll looks to notch that victory this weekend as they tangle with Team Upchurch (1-0) this Saturday at Grace Christian.

Team Coffin will be on a mission to bounce back as they battle Team Jeffers (1-0) at Grace Christian this Saturday.

The loss offset an outstanding effort from John Bryant (Jefferson County) who scored a league high 27 markers on a variety of inside moves and short jumpers.

Kelvin Jackson (Carter) led the winners with 19 points followed closely by Jordan Bowden (Carter) with 16. Upchurch pitched in with 12 while Miles Thomas (South Doyle) added 11 in the win.

Bailey Lamb (Grainger) was the only other member of Team Feltner in double digits as he finished with 19. Feltner will take on defending champion Team Matthews (1-0) this Saturday at Grace Christian.

Team Upchurch looks to move to 2-0 as they welcome Team Driscoll (0-1).