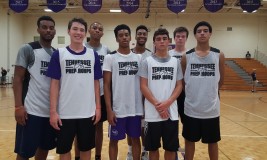 Championship Saturday was a blast. Lets see how all the action went down.

Austin Kirby (Hendersonville) led a group of five in double digits with 27 as Vanderbilt closed the season on a high note with a 114-74 win over Syracuse on Championship Day at the Tennessee Prep Hoops Nashville Fall League.

Donovan Henry (MLK) dropped 22 for Syracuse followed in the scorebook by Omar Lyons (Siegel) with 16, Kevin Rimmer (Ezell-Harding) with 15 and Case Bouldin (Ravenwood) with 11.

K.J. Lesure (Centennial) canned a pair of foul shots after bringing Florida back from a double digit deficit and slid past North Carolina 97-96 in one of the best game in the Nashville Fall League ever.

Lesure scored 26 and was instrumental in bringing his squad back from their late deficit. Lesure and Mike Parker (Maplewood) set the tone with their passing as well. Calvin Bak (Alabama) was the benefactor of those generous dimes as the senior notched a game high 36 points. Parker finished with 10 in the win.

Austin Fisher (Clarksville Academy) had his best game of league with 25 points in the narrow loss. Cannon Campbell (Rossview) added 17.

Trey Phifer (Big Sandy) and Deonte Alley (Blackman) scored 24 and 21 respectively as Clemson prevailed in a high scoring affair 106-92 in the 3rd place contest of the Nashville Fall League.

A battle back and forth, Kenny Cooper (FRA) kept Virginia in the game with timely scores and creative dishes to the likes of Tyler Faulkenberry (Mt. Juliet) who finished with a team high 20. Cooper would finish with 18.

Evan Ragsdale (CPA) added 16 in the win for Tennessee. Nick Murphy (FRA) had 11 for Virginia.

Huge thanks to all the players, parents, CPA, sponsors and workers who helped make this the best version of the Fall League we have had to date.