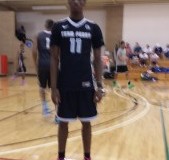 What's in a name?

You call him Dorsey, Ill call him Fitzpatrick.

Either way Donte Fitzpatrick (Southwind) is now officially off the board.

Fitzpatrick had the opportunity to show the versatility in his game over the summer. With the high scoring Lawson brothers and Florida signee Keyvaughn Allen providing majority of the scoring for Team Penny, Fitzpatrick found his niche setting teammates up and playing tough and aggressive defense for 94 feet.

Fitzpatrick becomes the 5th member of the Class of 2014 to pledge D1.

Ole Miss is of course a charter member of the Southeastern Conference and the Rebels are coached by Andy Kennedy.