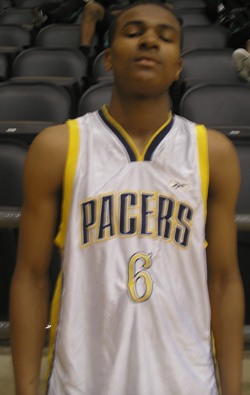 A great start for several 17 and under squads got a huge boost of adrenaline with some sterling performances at what most call the unofficial opening of the summer hoops tour, the Real Deal at the Rock.

The state had an awesome showing with one squad making the final eight another the sweet 16 and several had showings worthy of mention.

The Memphis Magic Elite had a tough run through the bracket banging a huge win over the pre-tourney favorite All Ohio Red then falling to the J-Smoove Celtics (Atlanta Celtics) on a last second shot from Tennessee commitment Jordan McRae.

Joe Jackson (White Station) was the buzz around the media contingent with his ability to rise and his improving floor leadership. As a scorer he has few peers but he has come to grips with the fact his position on the next level is the point and he is making much better decisions with the ball and looking for the open man. His points have become more efficient as he is taking less shots but still has the ball in his mitts when the game is one the line.

Chris Crawford (Sheffield) Played his best against the best scoring a team high 23 against All Ohio. Great size for a guard with a terrific outside shot.

Tarik Black (Ridgeway) The big man has found his way onto every high majors recruiting wish list with his non-stop motor and relentless efforts on the glass. He is limited to scoring around the bucket and when he adds the short jumper and maybe a go to move he could get paid to play one day. Regardless this cat is legit.

Mardracus Wade (Mitchell) Put Drake in with the other high major players in this group. His defensive ability alone seperates him from his peers. His outside shot needs a tweak or two but is consistent and goes in when the situation is big. Love his intensity and can never loose attitude, someone is getting a gem.

Ronald Brown (Raleigh-Egypt) "Tank" showed some much improved ability off the dribble scoring with a hard push to the right or left and finishing with either hand. He knocked down several short baseline jumpers and played his usual game on the glass.

Adonis Thomas (Melrose) One of the best finishers on the break I have seen in some time. His size and strength seperate him from the pack. He has added a short jumper that will serve him well if used properly. Played tough defense against some of the best wings in the country.

Other Magic hoopers who showed out this weekend include Todd Mayo (Houston) and Carlos Denton (Hamilton).

The Nashville Celtics showed the world they are for real winning their pool then swatting All-iowa Attacj attack before falling to the tourney runner-up Dallas Heroes.

Austin Hollins (Germantown) Those who have not seen him are missing a long athlete who can finish inside despite his slender frame. He can drop the outside shot and defends well. He had some good efforts in front of some big people so don't be surprised to hear his name mentioned prominently very soon.

Casey Prather (Jackson Northside) Was very solid defending one of the nations best scorers and showed he could score from the outside and is devastating in transition. His athleticism sperates him from the pack while he improves his game off the dribble.

Cody Henegar (Marion County) Big Cody had a fine tourney in Arkansas showing some much improved toughness and fight especially on the glass. His length allows him to block shots from the help side and I was very excited to see him battle some of the monsters this event threw his way. His offensive game is solid and he shoots well from the outside, nothing but upside from this long and talented young man.

Kedren Johnson (Marshall County) This Class of 2011 prodigy did some serious work over the weekend. Playing in both the 16's and 17's games he showed out in front of the folks with his leadership ability and fearless attitude. His game off the dribble is fun to watch as he seems to always make the right decision be it a tough drive or dish to scoring teammate. As he develops his body his stock is on the upward spiral... for sure.

Ish Sanders (Cleveland) Very impressed with his fearless attitude and ability to score against bigger and stronger players. He seemed to come up with big plays on both ends of the floor at crucial times in the game.

The Mid-State Ballerz advanced to the sweet 16 of the  consolation bracket before falling early Sunday. Tarius Johnson (Liberty Tech) led the Ballerz in scoring averaging over 25 per game while outstanding efforts were put forth by Demarius Smith (Kenwood) and Thomas Greer (West Carroll).

Team Nashville also fought their way to the Sweet 16 of the consolation bracket before aflling to the powerful SYF Players. Emmanuel Andrews (Shelbyville) had a nice run showing his game is back where it needs to be this summer. Teraes Clemmons (Mt. Juliet) and Holden Mobley (MBA) both drew praise for their games this weeekend.