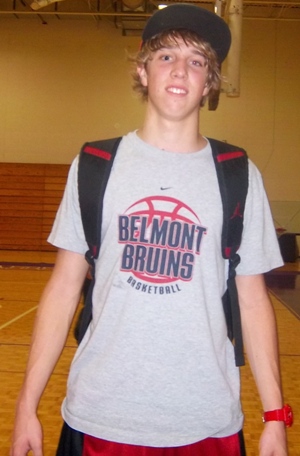 Saturday at Siegel High School marked one of the many play-days that dotted the schedule around the state. I made my way to the ‘boro to check things out.

Here are some of the players who stood out in this event.

Active senior guard showed a lot of poise scoring the ball against a tough defense in Siegel. Cline has deep shooting range and can put the ball on the floor and finish in traffic.

Huge improvement in his offensive skills lefty has a funny release but will knock down the corner three. He is longer than he was in the summer and is the catalyst for the Stars this season. Very active defender, plays with passion, his game is just around the corner. Stay tuned.

Big, big time shooter can launch with defender flying at him or a quick head fake and reset and splash. Has good length and is aggressive on defense. I like where he is headed.

Dropped 24 in the game against Oak Ridge including several crowd pleasing slams and a bucket full of threes, he runs the floor like an antelope and if his feet are set he can knock down the outside shot. He still needs strength as many balls were knocked away while he soared to the hole.

Steady and powerful, Bradshaw showed leadership skills for this ultra youthful CPA group. He scores when he needs to and is a sneaky, help defender. His aggression is what brings the hype into the Lions motor.

Active lefty who knows how to score on the interior and has a quick step and good range on his shooting touch, Merion is athletic and skilled, if he gets to 6'6 or 6'7 look out. Merion was high scorer against CPA with 14 points and added 19 in the win over Northeast.

Young man showed incredible hops and finished numerous plays with a thunderous slam, then stepped outside and knocked down a couple threes. He is a bit undersized for an inside kid and will need to improve his handles to become an everyday guard but his athleticism is for real.

After a sub par effort in the CPA game, Shoffner made his presence known in the win over Northeast finishing with a team high 20 points including a pair of threes.

Despite a losing effort for Northeast, Poythress managed to do his best scoring 30 points, 11 rebounds, 3 blocks and a steal plus he took a couple of charges. I guess all we can say is he was 6 of 11 from the foul line, so there is something to work on. He was tremendous and is on the verge of a huge senior season.

Others Who Played Well: