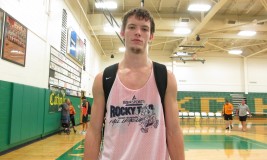 Post Holiday Tournaments permeated the hoops landscape from one end of the state to the other. I have attempted to round up all the results as best I could and will present this to you starting with East Tennessee and West Tennessee in the first story and a separate follow-up featuring the tournaments in Middle Tennessee.

CPA used a 22-2 third quarter push to grab the 3rd place trophy with a 67-40 victory over Oak Ridge at the annual Arby's Classic Tournament in Bristol.

The Lions suffered their first loss of the season in the semi-finals falling to eventual champion Greater Atlanta Christian.

Ooltewah got 21 points from Ron King (Ooltewah) to stake their claim of third place at Best of Preps with an 85-54 drubbing of Notre Dame.

Siegel drifted to East Tennessee to remain unblemished as the Stars behind 24 points from Charles Clark (Siegel) bested the host team Bearden 84-68 at the annual Super 16 event at Bearden High School.

Joining Clark in the scoring column was senior point guard Ryan Jones (Siegel) who finished with 16 and Aden Burton (Siegel) who added 15 in the win.

Jones was huge including a 22 point effort in the opening round win over a determined JeffersonCounty squad.

The Stars had a fight in the semi-final round but came up on the right end of the ledger against CAK 50-46.

Top Scoring Efforts at the Super 16:

Stone got to the finals with wins over David Crockett, Austin East, Maryville and finally Fulton in the championship game.

Barford was the real deal from the jump as he scored 24 in the opening round victory over BTW (72-67). He notched 14 in a balanced scoring effort over the host team Poplar Bluff to the tune of 76-60 before exploding in the finals.

The Eastern Kentucky signee was at his best garnering the MVP honors for the event with his scoring exploits which included a 17 point opening round effort against Bradford followed up with 33 large against Class AAA powerhouse Dyer County.

Treyvon Brown (Humboldt) and Stephon Turner (Humboldt) added 16 and 14 respectively to the victors.

Bradford showed why he is one of the top players on the West Tennessee landscape. His efforts inlcuded a 29 point outburst against Crockett County in the opening round of the tourney.