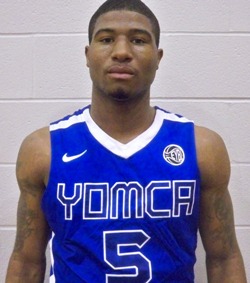 The gym is lined with coaches representing every conference and major university in the country, I see Texas, Connecticut, Duke, Clemson, North Carolina, Butler, Vanderbilt, Alabama just to name a few.

They came to watch one of the hottest teams on the circuit do their thing. Martavious Newby (BTW) simply said enough and the Memphis senior scored 7 straight points and assisted on a sic dunk to a sprinting Kadarrio Fleming (Ridgeway) as the Memphis YOMCA busted up a close game and rolled to a 63-47 thrashing of the Playaz.

The win moves Memphis to 4-0 at the Nike Peach Jam which is host to the Elite Youth Basketball League (EYBL). The YOMCA will play one more pool game tomorrow morning against The Family from Michigan.

Jarnell Stokes (Virginia) was again a beast on the interior scoring a team high 18 markers and snatching 12 rebounds. Yes I know that says Virginia beside his name, for those who have not heard Stokes will play his senior campaign at Oak Hill Academy. Newby would finish with 13 points in the win.

Yesterday began with a close contest as Newby dangled 21 points and the YOMCA escaped with a 73-71 win over California Supreme. Stokes and Shaq Goodwin (Georgia) both finished with 14 points respectively.

In the evening session, Fleming had the hot hand finishing with 19 points to lead the YOMCA past Albany City Rocks 71-62. Newby finished with 17 while Stokes added 12 in the win.

Despite not scoring a lot of points, Sam Craft (Craigmont) has been as steady as a point guard can be. The rising junior is fearless and leads by example, sacrificing points to distribute and plays tough defense on the oppositions best backcourt player. Craft is the definition of a winner.

The place was packed to see the YOMCA dismantle the highly touted CP3 group and their national star Rodney Purvis. Stokes led all scorers with 16 points as the YOMCA ran away with a 73-59 trouncing. Anthlon Bell (Bartlett) was outstanding scoring 15 points, while Newby added 14 and Goodwin 11 in the victory. Newby was also outstanding on defense as he held Purvis to 8 points.

Also at the prestigious Peach Jam, Alex Poythress (Northeast), who is running with the Georgia Stars has been quite dominant in his games including a big win over All Ohio this evening. Poythress finished with 24 points in the victory.

The Peach Jam has expanded their efforts to include a 16 and under division this season and the Memphis YOMCA was chosen as one of the 16 participants.

The YOMCA fell in their game on Tuesday but bounced back well with a 62-56 win over the Metro Hawks in Wednesday afternoon action.