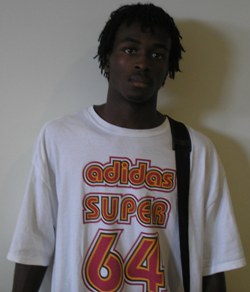 The suspense is over.

We must take into consideration what each classification brings to the table and the appropriate schedule for such. If a Class A squad is in front of a good AAA squad that does'nt mean we think the Class A squad is better. Each team is judged on their merits and how they have played thus far against the competition on their scedule.

The Pharoahs are deep, talented, tough and did I mention deep. Anthony Jones is emerging as a star among his peers.

The minor setback at the Arby's was against a big time squad and this version of the Bulldogs will stop at nothing less than a long stay in the 'boro.

This squad is relatively young but man are they good and talented. Sophomores Adonis Thomas and "Mighty" Chris Jones lead a deep roster of athletes ready to shine.

This Roadrunner squad is for real and sophomore point guard Brandon Lopez is fast becoming the leader and heart for this squad.

Who woulda thunk it? The Choctaws graduated majority of their scoring and rebounding but have still managed to stay on top. T-Rex Pierce is the offense and C.J. Crittendon the defense.

Losses to some tough squads and they seem to found their mojo as of late. Andre Hollins is the perfect complimentary scorer to the other guy they have......

Still the defending champion and still one of the best in Memphis. Depth will always be a Roadrunner mainstay and the emergence of inside forces like Cadarrio Macklin and Tarik Black make the future clear for Coach Henning.

Suffered their first loss last week but that usually just makes them angry. Unsung players with unselfish agendas make this version of BTW special. Larry McGaughey will be sought after when it said and done.

Gary Pope is for real. The undersized power man does nothing but get it done on both ends of the floor and with a healthy Taverres Jefferson this Ensworth squad is determined to hold the gold.

You could see in the pre-season this was a better squad than last year. Chase Dunn is not the only scoring option and they have some depth to make this a special season.

Knocking the rust off in December and playing very well as of late the Stars are primed for their ultimate destination a short trip to the Murphy Center. Kerry Hammonds is the show stoppa but nothing gets done without work from Marc Gooch and Levon Tate.

This district is the standard bearer for all Class A districts in the state... period. Now the torchbearers are the Vikings of Humboldt. Charles Taylor and Tevin Crayton are the focal points but a deep and athletic roster make them a big deal in this classification.

They have met every challenge that has faced them this season and are bound and determined to represent come state tourney time. Carson Newman signee David Ware is simply lighting up the scoreboards and his ample supporting cast is fierce.

10 On the Rim (Listed Alphabetically)