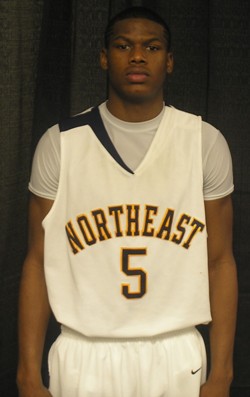 The finals are set for tomorrow at the Venture Express Great 8 Holiday Tourney taking place this weekend at Riverdale.

Clarksville Northeast ran by Maplewood 68-54 and Hunter's Lane overcame a number of furious Riverdale comebacks to finish off the Warriors 62-55 and set up the showdown.

Telvin James (Clarksville Northeast) was the catalyst with his steady point guard play and scoring stroke from deep. The talented senior guard accounted for 20 points and kept the tempo to his liking with several timely dishes to excited teammates and some sterling defense as well.

Alex Poythress (Clarksville Northeast) finished as the games top scorer with 21, on numerous offesnive putbacks, short baseline jumpers and a three from the top of the key. He had double digit boards and blocked several shot attempts.

In the other semi-final balanced scoring and tenacious full court defense are the calling cards for the boys at Hunter's Lane and they run this style to perfection.

The Hunter's lane pressure makes you play at an uncomfortable pace and their depth allows them to come at you from the opening tap till the final whistle.

In the earlier games, Reece Chamberlain (Beech) scored 30 and helped pick up the scoring slack for the injured John Taylor (Beech) as the Buccaneers edged Independence.

In the first game of the day, Blackman got a game winning layin by DeShawn Smith (Blackman), who finished with 10, to slip past Shelbyville 55-54.

Emmanuel Andrews (Shelbyville), who finished with a game high 23, fouled out with a couple minutes remaining in the game and Shelbyville clung to a one point lead with less than a minute remaining on the game clock.

J.D. White (Balckman) scored off a missed shot and put the Blaze up by one with :17 ticks left before a foul put Shelbyville at the line.

Washington made one before Smith went length of the floor and converted at the buzzer.

Jalen Smith (Blackman) was tops for the Blaze with 21 points.

6’0 2022 Colby Raymer (BMaze BJ) has led the way this morning with his facilitating & playmaking ability. Making plays off the bounce. Getting into the paint. @BMazeElite #PhenomStayPositive