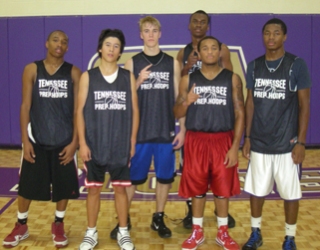 So you think the fall league doesn't mean a lot to the players involved, obviously you were not in attendance on Saturday at CPA for the championship game.

North Carolina behind 32 points from Malcolm Smith (Clarksville Academy) overcame a 10 point second half deficit and gatored past Florida for a 72-60 victory and the championships of the Tennessee Prep Hoops Nashville Fall League.

Both teams, Florida and North Carolina, came in unbeaten and from the outset it was crystal clear this was going to be a battle.

Kyle Weldon (Rossview) helped Florida run out to a 45-35 lead with three quick buckets including a couple of slams and things were looking bleak for North Carolina.....until Denzel Clark (White's Creek) took it upon himself to straighten things out.

The fireplug senior scored a tough and one bucket, banked in a three, converted a tough contact laden lay-in and dished to an open Micah Farmer (MTCS) to knot things up and get Carolina back on its proverbial feet.

From there Smith took over physically and a strong second half from Jeffrey Carter (Maplewood), who finished with 12 points, led to the eventual victory.

Clark, who finished with 13 points, was selected as league MVP as his team finished unbeaten and his dedication to his craft was impressive.

Balanced scoring has been the trademark for Kentucky all season and today was no exception with Robert Veal (Ravenwood) leading the way with 29 markers followed closely by Ross Welch (USN) with 28 points and Joshua Erickson (DCA) finishing with 24. Jonathan Swift (Franklin Classical) joined the scoring parade with 14 points for the winners.

McLemore was virtually unstoppable in the second half; he finished with 8 three's helping account for his 50 point total. Collin McMullin (Harpeth) continued his high scoring fall league finishing with 30 points.

You could hear the oohs and the aahs from the crowd in attendance and with every jump shot and rebound it was apparent that the growth of Jalen Lindsey (CPA) was happening right before our eyes. The rising freshman wing scored 32 points and grabbed 21 rebounds leading Clemson past Vanderbilt 96-63.

Lindsey was joined in the scoring column by a bevy of teammates including Connor Brandon (Wilson Central) with 23 points, Derrick Hankins (Cumberland County) with 16 markers and Jess Morris (Harpeth) with 10.

Andy Moore (Ravenwood) was flawless from the field missing nary a shot in the second half and the rising junior guard finished with 30 points leading Tennessee to a 104-72 victory over Wake Forest in the days opening game.