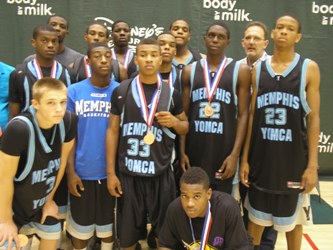 What a wonderful summer for the youngsters of the Memphis YOMCA. It seems like the poor dudes have played a hundred games between the 16 and under Super Showcase and the Nationals.

Since starting the Nationals things have looked good for the Memphis crew. Dominating their pool like a huge lifeguard, they win their initial game in bracket action but then fall by one and move to the third round of consolation action.

Then the winning starts again, Wayne Martin (Florida) and Andre Hollins (White Station) drop 17 and 12 respectively as the YOMCA gets by the Memphis Hawgs 53-49. The Y then drops the first of two Indiana squad, 75-40 over the Indiana Select 2011, Hollins scores 20, while Steve Kasper (ECS) tacks on 13 and Martin pins 10.

The second Hoosier victim, Spiece Select 2011, falls 74-62 and Hollins goes off. The rising junior bangs 30 points in the huge win to move the Memphis record at the Nationals to 7-1. Martin chips in with 14 and Nino Johnson (White Station) adds 13.

Hollins and Kasper both finish with 16 but it's not enough as the YOMCA falls to the Showtime Ballaz 51-50 and secure the medals as the 12th place finisher. Over 100 teams participated in this event and finishing in the top 12 is a mighty fine accomplishment.

For the Nationals, Hollins finished at a 17.2 per game scoring clip and Kasper, who really played with confidence and proved he could run at either guard spot, finishes at 10.7. Martin was the team's second leading scorer at 11.3.

The YOMCA was not the only team from our state who had a very fine showing at the Nationals. The Middle Tennessee Magic also finished 3-0 in their pool but fell 73-59 to a very good Team Georgia Elite. With the loss the Magic dropped to the 2nd round of consolation play and then decided to put together another lengthy win streak. First they drowned Ocean Potion 61-51 and put out the Elizabeth City Blazers 83-71. Not finished yet they put the beep beep on the Roadrunner Sports Club before falling to Da House 79-65.