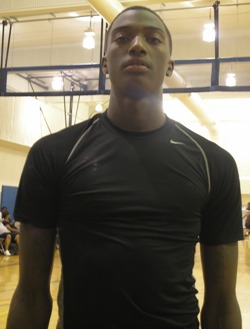 Let's examine the facts, he's athletic, can play either guard spot offensively, can defend up to three and maybe four spots defensively and is a good kid. He works tirelessly and is a good teammate.

Sounds like a no-brainer to me and that is also the consensus for Coach Scott Sanderson and his staff with the Bison of Lipscomb.

Demarius "D.D." Smith (Kenwood) made it official today choosing the Atlantic Sun stalwarts over Austin Peay and several others for the services of the talented Mr. Smith.

A superb athlete with length and an aggressive demeanor, Smith is comfortable running the lead guard and has improved his outside scoring to be a threat. He is at his best in transition either leading the break or filling a lane and flushing the finish.

He will get immediate playing time for his ability to guard the ball on the perimeter as he did these past few summers as a member of the Mid-State Ballerz.

Smith told us, "I love the way they play and it was close enough to home, to be away but not to far away".

Now with his commitment Smith becomes the 17th member of the Class of 2010 to pledge. He joins Robert Boyd (Fulton) as Tennessee members of next year's incoming recruiting class.

Now Smith can concentrate on leading Kenwood as far as they can go in his senior campaign.

Smith is a great young man who has a chance to be a very good player on the next level. I wish him nothing but the best in his future endeavors.