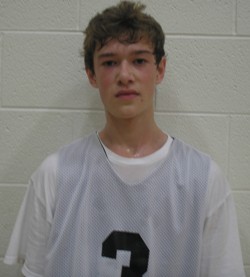 The first round of the playoffs took an interesting turn at
the Tennessee Prep Hoops Nashville Fall League this past Saturday as some of
the top seeds from the two divisions fell in their opening playoff contest.

Skylar Sims (CPA) converted a driving hoop then the front end of
the one and one and overcame another magical performance from shooting star Killen Middleton (MTCS) to give Florida, the 4th
seed in the SEC, a narrow 89-88 victory over Duke, who finished as the top seed
from the ACC.

For the record, Middleton finished with 43 points and Sims
garnered 41 of his own.

Sims scored on a variety of tough forays to the bucket and
aggressive put backs along the way. He was assisted in the scoring column by Ryan Gentle (FRA) who finished with 18
and Allen Heaston (CPA) and Andre
Gillespie (Hunter's Lane), who finished with 15 and 13 points respectively.

Middleton was dynamic from deep converting 10 of 19 from
three for the majority of his points. Lee
Dreaden (Nashville
Christian) added 16 for Duke and Matthew
Wilson (CPA) finished with 11.

Duke will take on Clemson in the 11:00 game on Saturday with
Florida taking on a familiar foe Tennessee in the opening
game at 9:00. The winner of the Florida/Tennessee contest will advance to the
title game at 1:00.

Tennessee
proved to be the only higher ranked squad that was victorious on this day. Jake Whitney (Ravenwood) added 13 for
the victors.

Tennessee will tangle with Florida at 9:00 on
Saturday and the winner will advance to the title game at 1:00. Clemson battles
Duke at 11:00.

Five players in double digits led by Montrae Williams (Spring Hill) proved to be the recipe for success
as the Techsters rolled past Vandy 84-46.

Georgia Tech will battle North Carolina in the 10:00 showdown with
the winner securing a date with the Florida/Tennessee winner for the title at
1:00. Vanderbilt will battle Kentucky
at 12:00.

Aptly named Anvil
Nelson (Brentwood) put the hammer down with 27 markers and helped lead North Carolina to a 70-48 bluegrassing of previously
unbeaten Kentucky.

Nelson scored on countless offensive caroms and tough
buckets in the paint to garner his totals.  James Cox (Brentwood)
added 11 in the victory and Josh
Williams (Lipscomb) contributed 10 the winning cause.

Chris Cox (Big Sandy) led Kentucky
with 18. The rising senior played his guts out for the shorthanded Cats.

North Carolina
gets new blood and a date with Georgia Tech at 10:00 on Saturday. The winner of
this contest advances to the ‘ship at 1:00.

Kentucky
will take on Vanderbilt at 12:00.