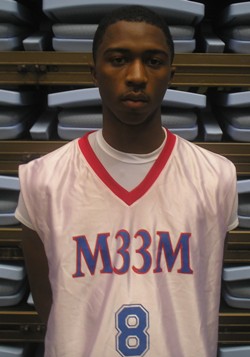 The second day of the Peach State One Classic in Augusta saw a repeat of the first days action.

The Ballerz are winning and Tarius Johnson (Liberty Tech) is flat blowing up. The Jackson product scored a game high 26 in a Saturday night victory. Anthony Green (Manassas) added 22 in the win.

Johnson then sank 26 leading the Ballerz to their third win in as many games. Johnson is averaging 29.3 after three games. Chris McClurkan (Dickson County) found the Peach State atmosphere to his liking as well dropping 17 points and 11 assists.

Demarius Smith (Kenwood) continues to amaze with his amazing explosion to the bucket. D.D. dunked thrice in the early game on the opposing squads 6'8 post man. Kaneal Windom (JCM) has been solid for the victorious Ballerz.

In the 16 and under division the Ballerz pulled off a big win over a talented Team United squad behind 31 points from Joe Northington (Manassas). The Ballerz fell in their next contest to one of the best 2011 squads in the country, The Southern Kings. Odgra Bobo (Liberty Tech) was sited for his outstanding play thus far in Augusta.