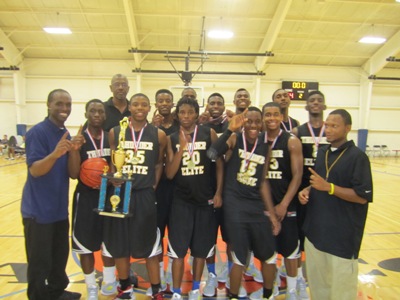 Down in St. Louis the Memphis Thunder Elite came in with a revamped line-up and swept through the competition at the St. Louis Summer Classic capturing the title against Mocan 74-57.

The Thunder Elite pounded the competition in pool play and had some tough teams to deal with in bracket action. The first victim turned out to be The Family from Michigan followed by the Wisconsin Playground Warriors and finally Team Ferrari.

Inside the Thunder Elite got plenty of quality action from the tandem of Fatodd Lewis (Raleigh-Egypt) and Marcanius Hymon (Whitehaven).

Running the show for the boys was Anton Beard (Arkansas), one of the top guards in the Southeast for the Class of 2014.

D.J. Anderson (Arlington) was solid playing tough on both ends and scoring key buckets in a variety of methods. Brandon Taylor (Raleigh-Egypt) was also lauded for his efforts during the tournament.