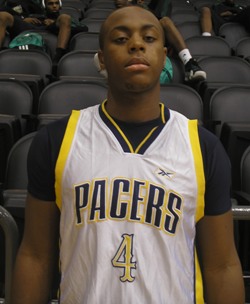 Thanks goodness we are nearing the month of July. Not much going on in the hoops world and then we will be bombarded with events one after the other.

Out in Memphis this summer is real important for the Memphis Magic Elite. A chance to do some things on the circuit that haven't been accomplished in quite some time.

Joe Jackson (White Station) is the unquestioned leader of the Magic and after a glowing NBPA Camp his stock, which was already at a high, is right on the verge of exploding in potential McDonald's All-American caliber.

Tarik Black (Ridgeway) took what those of us in Tennessee have been saying for years, which is the boy can play, and showed the NBPA Camp he was legit. After a very solid April and May, this Roadrunner is ready to climb the national charts.

Coming off an injury at the TOC, Ronald "Tank" Brown (Raleigh Egypt) is more than ready to continue what has been thus far an outstanding summer. Look for Tank to make some serious noise as the Magic travel around the globe.

The Magic will be looking for help from the oustside from the likes of Chris Crawford (Sheffield) and Wil Martinez (Lausanne). Crawford is another prospect who can make this July into one that catapults him into the national spotlight.