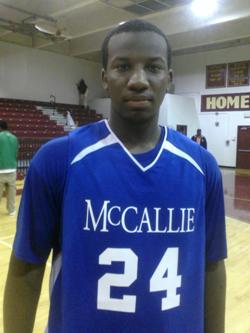 Before we start the exciting write-up for the McCallie vs.
Tyner Academy Hall of Fame Game last night, I wanted to let everyone know, I
have changed the district and region predictions to next week.

I overestimated my time and just cannot get them out this
week, because of a deadline on another project.

Sorry for the inconvenience and I hope you will enjoy them
when they come out.

Now my trip to Chattanooga
was one that I had looked forward to for a week. The chance to see some of best
young talent in the state; as well as, the deep, talented roster for the Rams
of Tyner, was an exciting venture for me.

McCallie would come out victorious by a margin of 85-67.

McCallie burst out to a 19-4 advantage behind the skills of
super sophomore Jordan Price (McCallie).
Foul trouble would keep him on the sidelines for the remainder of the half,
but McCallie built a 25-9 first quarter lead and settled in at the half ahead 40-25.
Price would finish with 12.

Tyner Academy closed the gap some in the second half behind
North Carolina A&T signee and newcomer rising senior Thomas Cooper (Tyner
Academy), who would
finish with a team high 21 on the night.

McCallie kept the margin at bay on the strength of some
serious marksmanship from junior wing Chad Lee (McCallie).  Lee finished with a game high 25 points most
coming in the third and fourth quarters.

Class of 2013 top dog Terrence
"Baby Duncan" O'Donahue (McCallie) showed his versatility early dropping a
three from the top of the key and his patented bank shot from the short wing,
just like Tim Duncan. Foul trouble also hindered his minutes in the second half.

Connecticut signee Michael Bradley (Tyner Academy)
was solid on defense blocking some shots and altering quite a few. He finished
with double digit rebounds but his offensive opportunities were few and far
between with the guards dominating the ball.