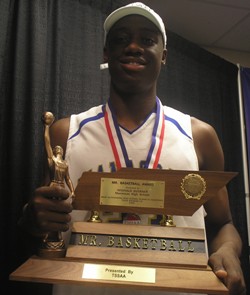 Not those exact words but close enough for comfort.

Marcus Holloway garnered MVP honors and picked up the scoring slack for Mr. Basketball winner Reginald Buckner and helped lead the Tigers to the schools first state championship with a 60-34 victory over Temple.

Buckner, who also garnered all-tourney honors, was assested two technical fouls and was forced to sit the remainder of the game.

In his absence Holloway, who would finish with 12 and sophomore Jospeh Northington who added 14 picked up the scoring slack and showed this Manassas squad was more than just a team, but a family.

Shaq Walker and Kendall Woodard both finished with 10 for the Tigers. Woodard also grabbed 10 boards, as did Buckner before his exit.

After the ceremony Buckner, who has signed with Ole Miss, recieved his coveted award. He was chosen over Jeremy Sexton (Temple) and Wes Long (Summertown).