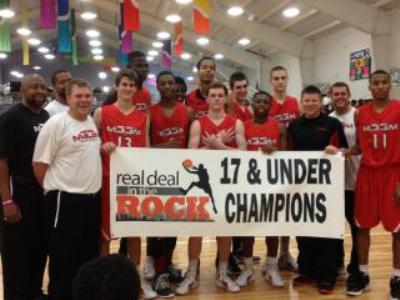 The hoops scene in Tennessee is getting quite the resurgence as the first live period comes to a close. Squads from the Volunteer state are bringing home the hardware and stacking it high.

M33M Elite cruised through their division (Mike Conley Jr. Division) to bring home the gold ball to Memphis with a championship game victory over the Kansas City 76ers.

Austin Nichols (Braircrest Christian) and Robert Hubbs (Dyer County) got a great deal of publicity during this well attended event as the duo averaged in the high 20's and kept all the coaches in attendance on the edge of their collective seats as they decide where to spend their college years.

Josh Jones (Memphis Central) continues his fine summer with another great weekend in Arkansas. His stock has been on the rise since the state championship game and he continues to rise to the occasion, especially when it counts.

Smith was especially nice controlling the tempo and playing with a savvy that belies his young age.

The Tennessee Tigers made up for their less than stellar weekend in Kentucky by finishing in the Sweet 16 in the same Mike Conley Jr. Division at Real Deal.

The Tigers won their pool with victories over the Carolina Hurricanes and the New Mexico Force but feel in the round of 16 to the aforementioned eventual champion M33M Elite.

Mason Ramsey (Livingston Academy) played his best tournament to date as one of the top scorers for the Tigers along with VCU commitment JeQuan Lewis (Dickson County).

Cole Harrison (Brentwood) continues to turn heads with his sheer size and much improved overall game. I look for a big summer from this Music City big man.

Coaches lauded the defensive efforts of C.J. McEwen (Mt. Juliet) and Gunnar Miller (Davidson Academy); as well as, the toughness and resilience of Bryce Copeland (Bradley Central), who returned this week from injury.

The Tennessee Chosen Few-Red made some noise in the Joe Johnson Division of the Real Deal winning their pool before falling in bracket play.

The Chattanooga Raging Storm found themselves having a hard time in pool play but rebounding to finish in the Final Four of the consolation bracket in the Joe Johnson Division.

D.J. Bowles (Cleveland) led the Storm with 16 markers in their opening pool game loss to the Compton Magic Black (62-48). Jahmal Johnson (Cleveland) was Bynum like on the boards snatching 16 caroms in this game.

Another tough loss, 60-57 to the Arkansas Heat saw turnovers make the difference in the outcome. Levi Woods (Meigs County) led in scoring with 15 points and also snatched 8 boards.

Things took a dramatic turn in bracket action with a nice 79-40 win behind 17 from Bowles and 15 from Tevin Hudson (Cleveland). Hudson also grabbed 10 boards. Johnson added 10 points and 8 caroms while Steadman Ford (Notre Dame) was praised for his court awareness and ability to keep the team in tempo.

Ford and Antonio Jackson (Ooltewah) again controlled the action as the Storm demolished the East Texas Ballers 66-46 to move into the semi-finals. Bowles, a Central Florida commitment, was again high man with 17 while Johnson finished with 15.

A great tournament came to a close with a tough 54-51 loss to the Houston Panthers despite 15 from Bowles and solid play from Ford and Jackson.

The Tennessee Chosen Few-Black came to play here in Arkansas finishing the tourney 3-1, winning their pool and falling to nationally ranked Dream Vision in bracket action.

Will Adams (Science Hill) was a true team player in this event; the 5'11 dynamo used his size and strength to pester offensive players and take his opponent off the dribble for easy buckets. Daijon McGill (Austin East) played another outstanding tournament leading the team with 17 points in the Dream Vision loss and playing steady all weekend.

Brandon Walters (Howard) finished with a double/double average for the tourney using his size to carve out position and showed some nice footwork and shot blocking prowess as well.