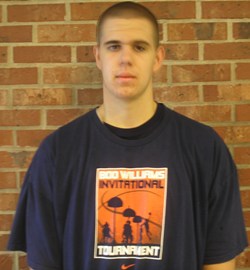 Is four the charm or do we still have more in our tank.

The coaching staff at Freed-Hardemann has been beating the bricks this season and as a result has pulled together a recruiting effort worth mentioning.

After a solid 24-10 campaign which resulted in a trip to the National Tournament, the Lions sealed the deal on another potential standout.

Kyle Teichmann (Brentwood) ended months of recruiting speculation and will sign on the dotted line with Jason Shelton and the TransSouth power.

Teichmann finished a superb senior campaign leading his squad in scoring and boards, his skill level and ability with his back to the basket will earn him floor time immediately.

His knack for knocking down the mid-range shot will keep him on the floor.