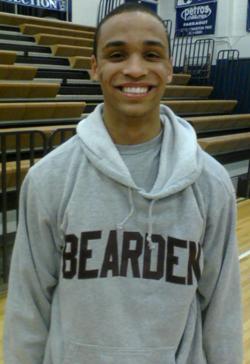 Rivalry games always bring out the best in the players, fans and coaches, so were we to expect anything less from another Bearden vs. Farragut showdown.

Jaeland Lawson (Bearden) busted for 24 points, 20 in the first half, helping the Bulldogs overcome a furious Farragut rally to post a 73-66 victory over the Admirals and move their season standing to 9-0.

Lawson was straight up sic in the first half shooting 8 for 12 from the field including 2 three's and helping Bearden to take a 40-31 margin into the half.

Behind some serious work from senior wing Landon Hunley (Farragut) the Admirals continued to close the gap and after a Hunley put back took a 57-56 lead with 2:40 remaining in the contest.

A pesky triangle and two defense by the Admirals put the ball in the capable hands of Bearden junior Rico "Suave" White (Bearden) and he responded. White finished the game with 15 and picked up most of the scoring slack in the third stanza, while the Admirals kept the ball away from Lawson and sharp shooting junior Ty Greene (Bearden).

The Bulldogs closed the game with a 13-4 run and kept their season mark unblemished.

Lawson led the Bulldogs with 24, while White added 15, Greene notched 14 and Spencer Peake (Bearden) added 13, including a big time three the possession after Farragut took their first lead of the game.

On Thursday night I made my way to Grace Christian in Knoxville to catch the opening day of their Christmas classic and found the hoping to be rather satisfying.

In the second contest, CAK marched past Bethel Christian of Kentucky 66-60 behind 16 points from junior wing Emery Naler (CAK).

Guess whose back? Back again. Cosby's back, tell a friend.

Tell everyone Cosby rolled past Grace from North Carolina 60-20, behind 15 markers from junior post Cory Conrad (Cosby) and 12 and 10 points respectively from Brad Ledford (Cosby) and Seth Wyatt (Cosby).