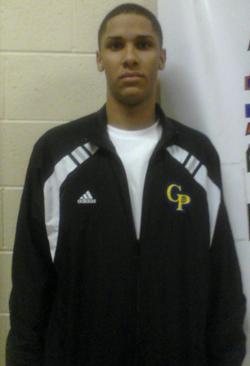 The Knoxville Panthers made some noise over the Memorial Day weekend with a very successful stint at the Paramount King's Island Memorial Day Shootout.

Things got off to a raucous start with an easy 30 point win over the New Beginning for Youth squad. Dustin Clark (North Carolina) led all scorers with 24 points followed closely by Morrease Barber (Gatlinburg-Pittman) with 19. Jose Agosto (Gatlinburg-Pittman) was huge on the boards with 14 caroms.

The second victim turned out to be the Southern Ohio Magic who fell by almost 40 points with Clarke again leading the scoring brigade with 26 markers. Barber put on a highflying dunk display including a classic throw-down off the backboard from Nathaniel Hughes (Hampton). Hughes and Chase Buckner (Union County) were sighted for playing well in this game.

Agosto took the lead in the scoring column as the Panthers moved to tournament play dropping 18 points and grabbing 12 boards in an 18 point victory over the Tennessee Warriors.

Clarke and Hughes scored 23 and 16 respectively as the Panthers fell in the second tier of tournament action by 3 to a very good Cincinnati Royals squad.

Skylar Brown (Seymour) played well throughout the tourney despite injuring his hand he finished perfect from the field for the tournament.

The Panthers played without a host of their nucleus in Cincinnati, yet still managed to finish 3-1 and played well despite being shorthanded