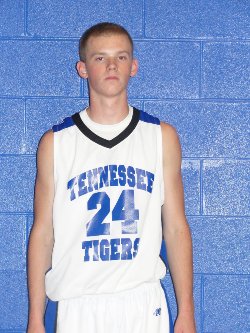 The Kentucky Hoopfest came to a rousing close on Tuesday with the Tennessee Tigers 17's capturing the bronze division championship. A host of Volunteer state entries played well while in the Bluegrass state, let's see how everyone faired.

The Tennessee Contenders posted a fine run finishing 3-0 in their pool and drawing a bye in the Gold division. For their hard work they drew one of the tourney favorites the BA Hoyas. The Contenders battled but the seasoned veterans grabbed the victory. Jack Montague (Brentwood) had a fine tournament running the team and scoring off short jumpers and drives to the goal. Cameron High (Lebanon), despite being undersized against majority of his inside brethren, scored well and played with desire on both ends of the court. Donya Burnette (Riverdale) scored buckets off the dribble and Tyree Nightingale (East Literature) showed a nice touch from the outside. The Contenders will head to Nashville and participate in the 2nd annual Tennessee Hoopfest which tips off on Wednesday.

The Nashville Tigers finished their pool play at 1-2 and fell in their opening game of the bronze bracket. Jordan Bedwell (White House-Heritage) was a welcome sight, the 6'6 wing/power forward showed a nice shooting stroke and some nifty post moves. He certainly made himself into a college basketball prospect with his play in Louisville. Andy Moore (Ravenwood) and Mark Sandoval (Friendship Christian) played well for the Tigers.

The Tennessee Ice skated to a 2-1 pool play record and a spot in the silver bracket playoffs. The Ice captured a victory over Charlotte Court in their first bracket game. Andy Barnette (Pigeon Forge) had a nice week shooting the ball and Calvin Walker (Knoxville West) ran the team with a steady hand. Scoring inside or off the penetration, JayJuan Mitchell (Knoxville West) and Cody Malicoat (Jellico) put up some gaudy numbers.

The Tennessee Tigers got on a sound run after finishing 1-2 in pool play and captured the bronze bracket with 5 wins in a row. Kyle Weldon (Rossview) and Logan Ramsey (Livingston Academy) did work inside while Will Downey (Ensworth), Ross Welch (USN) and Nilan Hodge (USN) proved to be on from deep much of the bracket tournament. Braylen Bennett (Carter) provided solid defense and rebounding and managed, despite the excessive amount of tape on his body, to score a few buckets as well. Casey Smith (Morristown East) played solid from the point guard spot on both ends of the floor.

In the 16 and under division the East Tennessee Pyro made some noise after a rather mediocre pool play appearance (1-2), finishing in the final four of the bronze bracket. Jordan Hall (Lenoir City) was the Pyro scoring leader with games of 21 and 19 in pool play. He dropped 17 in the bracket win over the Gainesville Wildcats and 15 in the semi-final game. Rian Hall (Oak Ridge) had a nice tournament as well scoring 17 in the Wildcat win and dropping 19 in the semi-final loss to the Illinois Jets. Cory Poteet (Campbell County), Terrence Hall (Lenoir City), Rashad Gray (Oak Ridge), Blake Golden (Knoxville West) and Ethan Hayes (Anderson County) were sighted for their efforts in Kentucky.

The Tennessee Tiger's 16's marched through pool play at a confident 3-0 getting great guard play from Jequan Lewis (Dickson County), Kevin Peterson (Marshall County), Gunnar Miller (Davidson County) and Caleb Tuck (Dickson County). A big win to open the gold division bracket play set up another meeting with the West Virginia Wildcats and a chance to advance to the final four. Lewis dropped 17 and Peterson 11 in the win over the Northwest Ohio Basketball Club but couldn't muster enough to get past the seasoned Wildcats squad. Mason Ramsey (Livingston Academy) and C.J. McEwen (Mt. Juliet) were solid on the interior throughout the Kentucky Hoopfest.

The Nashville Stallions came to play as they ran away with a 3-0 pool play mark then hit a buzz saw in gold bracket action falling to TSI Red. Several of the young Stallions caught the eye of the coaches in attendance including Gonda Ameni (Smyrna), D'Andre Ferby (Ensworth), Charles Macon (LaVergne), Dolorean Sparks (LaVergne) and Jericho Williams (McGavock).