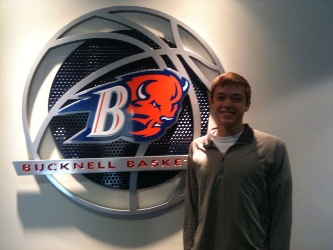 We have often stated that as far as we are concerned July is the most important month for a great number of high players in the country.

Having a successful July was exactly what Steven Kaspar (ECS) had in mind as he helped lead his Memphis YOMCA team to a playoff finish at the 17 and under Nationals in Orlando.

His efforts and leadership were not ignored as school from around the country decided the lanky point man was someone they would like to have on their future rosters.

Kaspar fielded offers from Tennessee Tech and Air Force before settling on his final destination the Bison from Bucknell.

Bucknell, who plays in the Patriot League, was a Sweet 16 participant a few years ago and is always right on the cusp of grabbing the conferences automatic NCAA berth.

Kaspar becomes the eighth member of the Class of 2011 to commit to a D1 school.

Future mentor Dave Paulson will love the combination of toughness and intelligence that makes Kaspar the player he has become. He can knock down the outside shot if left open and makes everyone around him better with his above average basketball IQ.