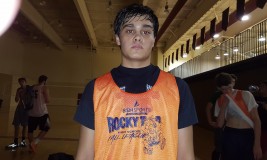 Two unbeaten squads fall, one remains as the season takes a week off for the Tennessee Prep Hoops Carson Newman Exposure Showcase. Lets check out the action from Week #4

Tajion Jones (Oak Ridge) pumped in a league high 40 points as Team Lane remained the only unbeaten squad in the league positing a 107-73 win over Team Steinmetz in Week 4 action at the H3 Sports Rocky Top High School Fall League.

Team Lane goes into the break 4-0 and will tangle with an angry Team Upchurch (0-4) on September 24th at Alcoa. Team Steinmetz (0-4) looks to get on the proper side of the score sheet as they welcome Team Morton (1-3) in two weeks at Alcoa.

Jonathan Webb (Alcoa) led a group of 4 in double digits with 18. Trisan Upchurch (Maryville) and Jacob Giles (Maryville) each netted 17 and rising sophomore Kolbi Billingsley (Sweetwater) pitched in with 14.

Team O'Hara (3-1) takes on Team Feltner (3-1) next Saturday at Alcoa. They are in a three way tie for first in the Stokes Division with Team Sharp. Big time game for championship Sunday seeding. Team Upchurch (0-4) puts in on the line against Team Arnold (2-2).

Luke Smith (Knoxville Catholic) made clear decisions with the ball, scored 26 points, overcame a huge 1st half deficit and helped Team Watts move to 3-1 with a tough 60-58 win over a balanced Team Coward.

Davari Reeder (Knoxville Catholic) added 15 points in the win while the workhorse Spencer Lowe (Maryville) pitched in with 13 markers.

Team Watts (3-1) looks to continue their 3 game winning streak as they battle a hard nosed Team Matthews (1-3). Team Coward (3-1) gets a shot at the unbeaten Team Lane (4-0) in McRae Division action.

Team Arnold (2-2) puts their two game win streak on the line as they battle Team Upchurch (0-4) next Saturday the 24th at Alcoa. Team Carnes looks to right the ship against Team Sharp (3-1).

Santana Haney (Cocke County) scored 19 markers as Team Morton recorded their first win of the season with a 68-62 triumph over Team Matthews. Josh Releford (David Crockett) added 15 while Mason Shelton (Dobyns-Bennett) and Bowden Lyon (Science Hill) pitched in with 10 each.

Team Morton (1-3) puts their win streak to the test against another determined squad Team Steinmetz (0-4) in action next Saturday the 24th at Alcoa. Team Matthews (1-3) takes on Team Watts (3-1).

Emory Lanier (Knoxville Webb) scored 21 markers as Team Feltner knocked Team Sharp from the ranks of the unbeaten with a 73-71 win at CAK. Risisng freshman Lanier was joined in the score book by Hunter Reynolds (CAK) with 18 and Cameron Gregg (Jefferson County) with 14.

Team Sharp (3-1) stand atop the Stokes Division in a three way tie and looks to capture the top spot next Saturday the 24th at Alcoa against Team Carnes (1-3). Team Feltner (3-1) could take the division with a win against Team O'Hara (3-1) or the opposite could occur.