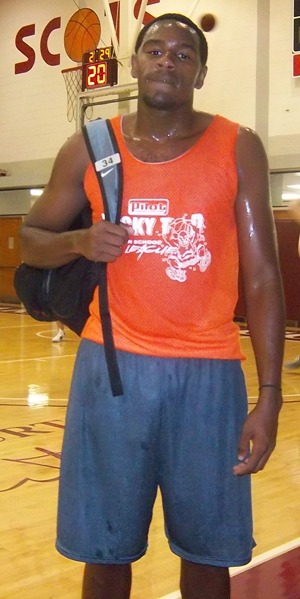 The Chattanooga Times Free Press Best of Preps tournament kicked off this evening with some solid action including a match-up of some of the best backcourt players in the East Tennessee area.

Cordell James (McCallie) was the big man on campus on Wednesday evening. The rising senior notched 23 points leading McCallie to a 67-58 victory over a determined Cleveland Blue Raider squad.

McCallie maintained a good lead for majority of the contest behind some inspired play from junior Terrence O'Donahue (McCallie).

C.J. Bryant (Cleveland) converted a foul shot and snatched his own miss and scored again narrowing the contest to 56-50 with a little under 3:00 minutes left to play.

D.J. Bowles (Cleveland) scored on a driving lay-in and the lead was shrunk to 2 with under 2:00 minutes remaining on the clock.

Never to be outdone, C.J. Reese (McCallie) scored on a three-point play the old fashioned way and McCallie was out of danger and came away with the solid victory.

Joining James in the scoring column were Reese and O'Donahue with 13 each and Jamaal Calvin (McCallie) with 10 points.

Bowles and Bryant finished with 13 each for Cleveland while Jarod Rhodes (Cleveland) added 11 in the tough loss.

In the nights opening round game, Red Bank got 18 points from Fred Matthews (Red Bank) and slipped away late from a young and younger bunch of Patriots to gather the victory 61-54.

Xavier Cummings (Red Bank) and Niquia McDuffie (Red Bank) finished with 14 points each for the Lions in the win.

Welcome one and all to the Reggie Upshaw (Baylor) show. The rising junior was fantastic scoring 25 points and helping lead his Red Raiders to a 53-31 drubbing of Notre Dame.

Upshaw did majority of his damage in the first half as Baylor climbed to a 34-12 halftime cushion.

Upshaw knocked down several threes and was active on defense blocking shots and snatching boards. His stock is rising quickly.

Trey Suttles (Tyner Academy) was a machine on the interior squashing every Ooltewah run and finally lifting the Rams to a 56-51 victory in the nightcap and final game of the day at the Best of Preps Tourney at CSAS.

The Owl led at the half and after three by the narrowest of margins and saw the lead slipping away before Mycheal Creech (Ooltewah) brought the capacity crowd to their feet with a breakaway slam to push the Owls to within a point at 52-51.

Suttles, who would finish with a game high 19 points, converted a tough reverse lay-in and the Rams held on from that point.