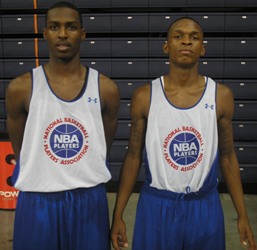 The speculation was always up in the air.

Where will he go, they would say and then the scenarios
would start to flow.

All along "The Real Thing" in his heart knew where his final
destination would be.

The hometown kid staying around to help usher in a new era
for a new coach and a new outlook for a program with a great deal of history
and success.

Joe Jackson (White
Station) as you may have figured out is staying home and will attend the
University of Memphis and new coach Josh Pastner could not be more elated.

Jackson, who helped the Spartans win the Class AAA state
championship last season, is a national treasure with aspirations of the
McDonald's game and a future so bright he undoubtedly must wear shades.

He has been a star on the AAU circuit for three years
playing for various teams and I recall my first encounter with him as an
incoming freshman he attended our first ever Tennessee Prep Hoops Rankings and
Exposure Showcase held that year at CPA in Nashville.

The scrawny little kid was beasting everyone in the camp and
everyone in attendance were clamoring for a look at this young phenom.

I have enjoyed getting to know Joe and can't wait to see
what he has in store for his upcoming senior campaign.

Memphis of course plays in
Conference USA
and has been a national power for years on end. Coach Pastner could not be more
excited about the future addition of the kid who will be the cornerstone for
his squad for many years to come.

Congrats Joe and good luck to you in all you do my friend.