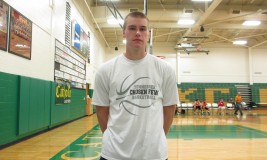 The holidays shortened the weeks so I have combined them into one week for the Week #6 scoring list.

Jordan Bowden (Carter) is putting up numbers for the Flying Hornets of Carter. The rising junior guard was big at the Seymour Christmas Event scoring 27 in a win over Memphis Carver and notching 33 in a close loss to the host school.

Nick Hopkins (Fayetteville) just put the school scoring mark on record as the rising sophomore passed the 1,000 point mark for his burgeoning career.

Brennan Bowling (Fayette Academy) had a monster holiday break. The senior scorer notched 27 in a win over HoustonCounty, busted 28 in a victory against Fayetteville then netted 30 in a win over MooreCounty. He closed his savage scoring week with 36 against Ezell-Harding.

Clay Hertel (DCA) is having a fine senior campaign leading the mid-state in scoring average. He kept his eye on the prize over the holidays notching 30 against Coffee County, adding 24 in another win and closing tough with 44 in a high scoring affair against Nashville Central Christian.

Austin Arrington (Seymour) had a game for the ages as the senior shooting guard notched 47 markers in a big win over Knoxville Carter at the Seymour Holiday Event. He saved his best for last scoring 25 in the fourth quarter alone.

Will Holt (Cascade) etched his name into Cascade history when the senior scored his 1,000 point over the holiday break.

Devin Sibley (Karns) is rewriting the record books in East Tennessee. The Furman signee had a great holiday break recording 28 points against HardinValley, adding 29 against Knoxville Catholic and closing with 37 in a close loss to Stone Memorial.

Austin Fisher (Clarksville Academy) might be the best freshman that no one has heard about this season. The diminutive guard is putting up massive points including 30 against Montgomery Central, 20 against Camden Central and another 30 spot against StewartCounty.

Will Holt (Cascade) 25pts vs. Forrest