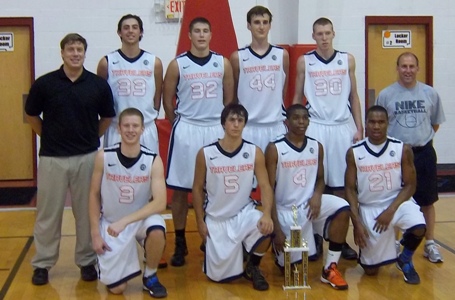 The Hoosier Shootout has always been kind to the people from the Volunteer state. This year would prove to be no different as three teams, one in each age group managed to find their way into the title games and a couple other squads found themselves in the thick of things down the stretch as well.

The Tennessee Travelers used 20 points from Jack Whitman (Kentucky) and 16 more from Justin Johnson (Kentucky) to put down Camp Darryl 71-52 in the Gold bracket title contest.

The Travelers got out to a big lead behind Whitman, Johnson and Burton "Big Money" Sampson (Knoxville Webb). Camp Darryl slowly kept creeping back but key hoops at timely moments from Brock Rowan (Stone Memorial), Devin Sibley (Karns) and Miles Rice (Kentucky) put the kibosh on their resurgence and the Travelers cruised to the crown.

The Travelers used a balanced scoring attack and claimed their stake as the king of the event with a Gold Championship Game win over Blessed Sacrament of Canada. Cameron Justice (Kentucky) was the leading scorer throughout for the Travelers. Oterriah Lee (CAK) played his best basketball of the summer in this event. The dynamo quit his over-penetration and hit his wing shooters for huge buckets, including Justice and Clay Leatherwood (Gatlinburg-Pittman), when he was not draining the foul line jumper for himself.

Cody Hialstock (White Station) was lauded for his defensive effort while Ty Allen (Farragut) and Christian Thieneman (Kentucky) played solid inside and on the glass.

The Panthers started off hot with a nice pool play victory over DB Hoops. Terry Holt (East Literature) led the way with 21 points following closely as always was Jacob McCullough (Hendersonville) with 15.

A last second shot cost the Panthers another pool win despite a big 31 markers for Kindrevious Webster (Hillsboro). Holt added 17 and McCullough pitched in with 16.

Holt was sensational from the field going 15 for 16 and 7 of 7 from the charity stripe to finish with 41 large in the bracket victory over Team One.

The Panthers came out of the gate slow but rallied to take a halftime lead before falling to the eventual runner-up Blessed Sacrament from Canada 62-54. Holt led the scoring brigade with 17 while Webster added 13 in the quarter-final defeat.

The Tennessee Tigers had a superb run lasting until the bitter end before falling to the Ohio Smac in the 15 and Under Gold Championship game.

The Tigers had supreme balance on both ends of the floor led by Mario Gordon (Pearl Cohn), Jordan Sandifer (Pearl Cohn) and Jaconus Blue (Columbia Central).