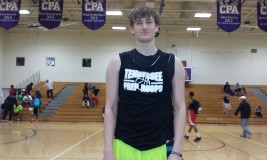 Championship Saturday was quite the adventure as the Tennessee Prep Hoops Nashville Fall League came to a close. Lets recap the action.

Kentucky waited until the final day of action to record their first victory of the season with a 108-80 triumph over Ohio State in the opening game of Championship Saturday at the Tennessee Prep Hoops Nashville Fall League.

Silas Clark (Cumberland County) scored 15 and Austin Jackson (Rossview) finished with 13 as Florida took the 4th place contest 77-68 over Michigan State. Mason McKnatt (Grace Christian) provided one of the highlights of the season filling in for Florida who was short players. The rising freshman shooting sensation dropped 40 points on 10 3's.

Damien Baugh (Cane Ridge) concluded an outstanding Fall League with 34 points for Michigan State. The rising junior guard will be a force to be reckoned with this season, mark it down. Drew Weikert (MBA) added 22 points while Will Nutter (MBA) finished with 14.

D'Marco Holley (White's Creek), playing for the other squad to help balance out the roster, led the scoring with 28 points. K.J. Johnson (Marshall County) finished with 17 points. James Polite (Blackman) added 12 in the win.

A close game at the half, Michigan blew it open in the second stanza behind the deep shooting of King before Auburn closed the gap with a late rally.

Special mention for rising senior point guard Imani Starling (Ensworth) who kept Michigan in the game with his defensive prowess and passing ability.