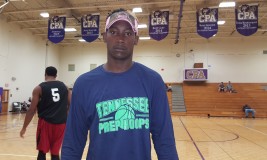 Its basketball time my friends and as always I am criss-crossing the state to bring you all the information that I can gather. Here is the first run of our weekly state scoring list that has become one of the most enjoyed features that we present.

College coaches have told me this is their favorite segment as they can see who is doing what in all three segments of the hoops landscape in the state of Tennessee.

Two weeks of holiday events bring us to where we are, here is this weeks scoring list.

Walter Crawford (Mt. Pleasant) may not be a household name for those in other parts of the state but in Class A middle Tennessee he is very well known. The senior guard had a nice holiday season dropping 28 against Franklin Classical and adding 25 against Fairview.

Patrick Good (David Crockett) had a wonderful and festive holiday season starting with a 44 point outbursts against a very good Providence Day School. He opened the Arby's Classic with 35 against Mentor, Ohio and added 24 in the Crockett win over previously unbeaten Oak Ridge.

What more can be said about Belmont signee and the leading candidate for Mr. Basketball in the Class A division. Nick Hopkins (Fayetteville) had a very Merry Christmas including gifts like a 47 point outburst against North Jackson out of Alabama, he added a 46 spot against Summertown then another 46 point gem against Wayne County.

Cedriontis Wilson (Blackman) might be the best player on the best team in the state. The Blackman Blaze sit unbeaten thus far after some holiday cheer which included a 30 point effort for Wilson against James Clemmons from Alabama and a 25 point effort against Cane Ridge in a battle of unbeatens at the Father Ryan Holiday Event.

Tyreke Key (Clay County) must have been on Santa's nice list. The junior guard had a massive holiday season including games of 38 against Hardin Valley, 33 against Westmoreland, 31 against Jackson County and a 29 spot against Whitley County, Kentucky. His squad is ranked #1 in Class A and his efforts helped them win two holiday events, the Smoky Mountain Classic in Gatlinburg and the Nera White Tourney at Macon County.