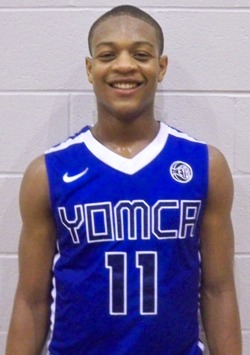 Elite 8 and Final Four action in the Super 80 Fall League commenced this past weekend here are the results:

Chris Jones (Briarcrest Christian) dropped 18 points leading the Suns past the Spurs 68-67 in the first of four Elite 8 games at the Super 80 Fall League in Memphis. Jones was assisted in the scoring column by Earvin Morris (Memphis East) with 15 and Marvin Smith (Ridgeway) with 14 points.

Kadarrio Fleming (Ridgeway) scored 18 points as the Grizzlies pulled off the mild upset over the favored Celtics and earned their way into a final four berth.

Fleming had plenty of help on the outside from Demetrius Dyson (Brighton) who finished with 14 points.

Adam Weary (Ridgeway) took scoring honors for the Celtics finishing with 12 points in the loss.

Andre Applewhite (Memphis Central) scored 19 points and snatched 7 boards as the Pacers overcame a 16 points Lakers first half lead to push past the favorites 62-60 and land a final four date with the Grizzlies later in the day.

Anthlon Bell (Bartlett) led all scorers despite the losing effort with 20 points, while Cameron Golden (Ridgeway) chipped in with 17 points.

Austin Nichols (Briarcrest Christian) finished with 20 points and running mate Jarnell Stokes (Southwind) added 12 as the Hawks bested the Thunder 63-46 in the final Elite 8 game of the day.

The Hawks will tangle with the Suns later in the evening in Final Four action.

Nick King (Memphis East) led the Thunder with 15 points and 7 caroms on the day.

Matthew Butler (Memphis East) scored 26 points as the Grizzlies moved past the Pacers 66-65 and a date in the championship game of the Super 80 next Saturday at Lausanne Collegiate School.

Sam Craft (Craigmont) led the Pacers with 15 points in the loss.

The Hawks used balanced scoring to drop a 63-43 blaze out over the Suns and secure their spot in the Super 80 championship game next Saturday.

Nichols led the scoring barrage with 16, followed by Stokes with 15, Demarc Richardson (Briarcrest Christian) with 13 and Larry Spicer (White Station) finished with 11.

Morris led the Suns with 16 while Jones added 12 in the loss.