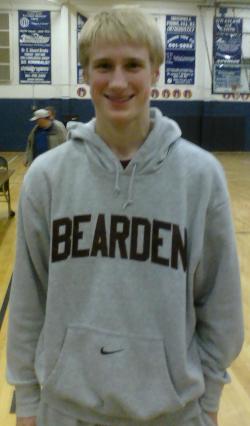 Ty Greene (Bearden) knocked down 25 points and helped key a huge Bearden comeback to give the Bulldogs a 68-64 win in the title game of the Super 16 Classic.

Bearden trailed right out of the gate 16-4 but slowly chipped back and made this a see-saw affair for most of the third and fourth quarters.

Bearden led 65-64 with Greene heading to the line for two shots. He nailed the first but missed the second but any hopes for a Central comeback were thwarted when junior Will Winton (Bearden) grabbed the miss and got the possession back. Jaeland Lawson (Bearden), who finished with 11 points, got fouled and iced the game with two more charity swishes.

For his efforts Greene was selected as the MVP of the tournament and was joined on the glitter squad by Lawson, Mattheiu, Zeke Holden (Knoxville Central) and Phillip Stanford (Knoxville West).

West rebounded from their tough loss to central the night before with a nice win over Webb 60-51. JuJuan Williams (Knoxville West) led the way with 16, while Stanford added 10. Dwight Tarwater (Knoxville Webb) led all scorers with 20.