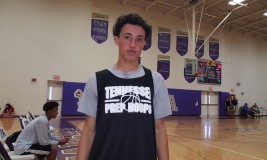 Halfway through the league schedule and things are starting to shape up at the Tennessee Prep Hoops Nashville Fall League. Lets check out what went down in Week #3.

Bryce Williams (Blackman) dropped 30 as Vanderbilt moved to 2-1 with a tough and exciting 101-92 win over previously unbeaten Auburn at the Tennessee Prep Hoops Nashville Fall League. The effort overcame a monster game from rising junior guard Jaden Lewis (Summit) who led all scorers with 33 points.

Coulter Dotson (Creek Wood) had another fine outing for Auburn finishing with 20 points in the narrow loss.

The win moves Vanderbilt to 2-1 at the midway point of the schedule. Vanderbilt battles Florida (1-2) this Saturday at CPA while Auburn (2-1) looks to get back in the win column against unbeaten Tennessee (3-0).

Balanced scoring was the flavor of the day for Tennessee as they moved to 3-0 with a tough 79-72 win over a shorthanded Kentucky squad led by Belmont commitment Grayson Murphy (Independence) who finished with a game high 26 markers.

Caleb Fields (Marshall County) had his way off the dribble leading the charge with 18 points for the victors. Brayden Jackson (Stewart's Creek) added 15 while Henry Hankins (Antioch) and K.J. Johnson (Marshall County) each had 12 in the win.

Tennessee puts their unblemished mark on the line this Saturday at CPA against an angry Auburn squad, coming off their first loss of the season. Kentucky (0-3) takes on Michigan State (0-3) with both squads looking for their first win of the season.

Jeremiah Barr (Independence) and Mason McKnatt (Grace Christian) dropped 21 points apiece as Indiana moved to 2-1 with a tough 95-88 win over Michigan State. The efforts offset an outstanding performance from Navy commitment John Carter (Summit). The rising senior dropped 24 points on an array of shots in the narrow defeat.

Indiana looks to stay on the winning track as they welcome unblemished Michigan (3-0) into the fold this Saturday at CPA. Ohio State looks to get off the losing schneid as they take on Maryland (2-1).

Caleb Hollander (Home School) scored 20 leading a group of seven players in double digits as Michigan got heated in a 113-86 win over Florida at the Tennessee Prep Hoops Nashville Fall League. Hollander, who finished with 20, was joined in the massive scorebook by Devan Cambridge (PJPII) with 19, Kellen King (Brentwood) with 18, Imani Starling (Ensworth), David Smith (Cane Ridge) and Chantz Hillsman (Cane Ridge) all with 14 markers and Jonathan Howard (Cane Ridge) with 10.

Michigan puts their unbeaten mark on the line this Saturday at CPA against a surging Indiana (2-1) squad while Florida (1-2) looks to rebound against a high scoring Vanderbilt (2-1) squad.

D'Marco Holly (White's Creek) scored 22 markers as the shorthanded Maryland squad moved their season mark to 2-1 with a handy 78-69 win over Michigan State.

Maryland goes looking for victory #3 as they take on Ohio State this Saturday at CPA. Michigan State (0-3) is bound and determined to get that elusive first win against fellow 0-3 Kentucky.