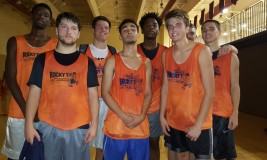 Another great season in the books thank you to everyone who helped make this another successful venture. The coaches, volunteers, referees and sponsors who made this all possible.

David Henson (Hardin Valley) scored 21 points as Team Morton closed the season with their first win and a 74-57 triumph over Team Morgan at the Rocky Top Championships at Maryville College.

In what was the highest scoring game of the entire season, Team Jones recieved a multitude of high scoring efforts as they slid past Team Garman 104-86.

Conley Hamilton (Powell) led the charge with 16 as Team Sharp closed the season with four straight wins including this 73-57 victory taking the 3rd place crown over Team Sexton.

Luke Smith (Knoxville Catholic) was again the catalyst as he rang up 15 points and helped lead his squad to victory.

Javion Johnson (Oak Ridge) had the hot hand but the steady hand of Geevontay Gee (Oak Ridge) proved to be final difference as Team Steinmetz took home the Rocky Top Fall League Championship with a 79-75 win over Team Upchurch.

Gee, who was named MVP of the League, finished with 14 but his control of tempo down the stretch made the difference for the winner. Johnson scored a game high 20 in his best effort of the season.

All-League Teams will be posted on Friday.