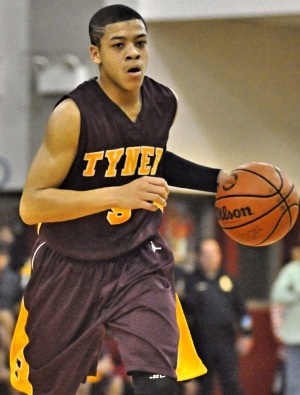 Full fledged hoops this past weekend at the Future 150 Main
Event in
saw the Volunteer state fairing very well in hardwood action.

Team Thad blazed on the scene picking up right where they
left off last summer dispatching of four opponents before travel conflicts cut
there tournament run short.

The crew got things
rolling with an easy 87-65 victory over the Birmingham Ice. Chris Chiozza (White Station) led the
scoring with 18 markers followed closely by Leron Black (White Station) with 17, Jerry Johnson ()
with 13 and Marcanvis Hymon
(Whitehaven) pitched in a double/double with 10 points and 11 caroms.

Victim #2 the D1 Ambassadors had little to offer as Team
Thad blasted their way to a 65-25 shellacking. Black took scoring honors with
16 while C.J. Anderson (Whitehaven) added
11 markers.

The Memphis Falcons proved to be no contest as Team Thad
bested their city opponents 64-16 with balanced scoring from Riley Norris () with 16, Anderson with 14 and
Chiozza with 12.

The Birmingham Ice apparently hadn't had enough so Team Thad
again made easy work of the
crew to the tune of 72-64. Hymon led a very balanced attack with 12. Black
added 11 in the teams final game before departure.

A newcomer on the summer scene the Chattanooga Elite started
the Future 150 with a rough 0-2 mark in pool play. Then things beam to pick
up...and pick up they did. The Elite began a five game winning streak starting
with a quarter-final victory over the Alabama Lightning 76-74 behind 22 points
and the game winner from Orlando Moore
(Brainerd).

In the semi-final
led with 18 as the Elite bested the Alabama Blue Devils 63-47. Young added 14,
Spence pitched in with 12, while Alex
Watkins () scored 11 and snatched 13
boards in the big win.

Moore and Spence continued to do damage as the duo scored 22
and 16 respectively lifting the Elite to the championship game victory over the
Louisiana Rockets 76-61. Cox chipped in with 12 and Young managed 11 in the
great drive to the crown.

The Panthers had a very nice opening weekend finishing 3-1
winning their pool and advancing to the final eight.

Terry Holt () declared this the summer of Holt with
his scoring performances for the Panthers. The rising senior guard notched a
triple double with 16 markers, 11 boards and 12 dimes in a tight 67-64 overtime
win against the Georgia Kings. Kin
Webster ()
managed 11 points and 10 boards as well.

Holt took the lead scoring 27 points as the Panthers marched
on the Arkansas Soldiers 79-63. Tyrell
Clary ()
added 16 while Ty Chilcutt (Station
Camp) and Webster finished with 12 and 11 respectively.

Holt continued to make the scorer's table folks work
dropping 29 in a close 64-61 win over Pinnacle. Patrick Smith () was
credited with 10 assists in this contest majority going to his prep teammate.

Holt finished out the tourney with a 26 point effort in the
Panthers 61-55 loss to Team Vigilance. Smith stuffed the stat sheet with 10
markers, 7 dimes and 8 caroms for a nice effort. Josh Brewer (Beech) had a solid game scoring 6 points, blocking 5
shots and snatching 8 boards.

In the 15 and under division, the Tennessee Panthers also had
a fine showing winning their pool before bowing out in bracket action.

Austin Douglas () dropped 17 points as the Panthers
bested the Alabama Force 67-54. Marquis
Davis (LaVergne) added 13 while Taveres
Hailey (MLK) and Jake West ()
pitched in with 11 and 10 each.

continued his
scoring rampage dangling 24 in a nice victory over Team Prototype. Joining him
in the score books were Davis and Preston
Brown ()
with 10 points each.

Brown was top dawg as the Panthers uncrowned the Georgia
Kings 82-73 with 16 points and 12 boards. Austin
Kirby (Station Camp) chipped in with a dozen, Victor Malo (USN) added 11 while Douglas and Davis finished with 10
each.