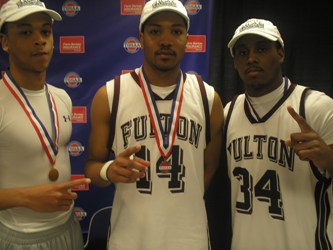 This one had a weeks worth of drama.

Knoxville Fulton held on to get past a furious Warriors rally and bring home their second gold ball in as many years with a tight 56-55 victory over BTW.

The Falcons let their experience take over from the beginning and held a 21-8 halftime lead over the Warriors.

More of the same in the third as the Falcons extended their lead to 20 and all was well in the Murphy Center.

Not so fast my friends, a furious 34-15 Warrior rally closed the gap and the Falcons behind some clutch foul shooting from Courtland Styles and Jalen Steele helped Fulton escape with a 56-55 victory and a second gold ball for the showcase at Fulton High School.

Steele, who was named MVP of the tourney, finished with 22 points, while Styles was huge scoring 17 points and grabbing 9 boards on his way to all-tourney honors.

MTSU signee James Gallman only managed six points but his deft ball-handling and intense defensive effort was gigantic in the Fulton victory.

Larry McGaughey led the Warriors with 22 points and freshman Martavious Newby had crazy eights, with 8 points, 8 boards and an astounding 8 steals.