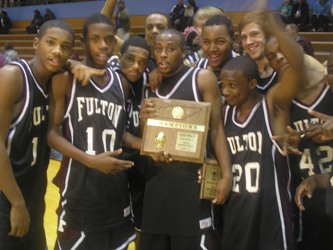 One of the oldest adages in the sports world has always been it's hard to beat a team three times. This was the case Tuesday night as the Fulton Falcons avenged two earlier defeats at the hands of Austin East to capture the 3AA district tourney with a 65-57 victory.

Jalen Steele led Fulton with 25, but clutch shooting and defensive effort from junior prospect James Gallman would prove to be the difference. Gallman, who finished with 17, canned two huge threes in the waning minutes of the game and came up with a gorgeous steal to solidify the Falcons triumph.

Austin East got out to the early lead on the strength of 7 quick points from junior Chance Jones. Fulton made up ground behind sophomore Robert Boyd, who gave the Falcons a much needed spark, and helped them knot the score at the half at 26 each.

The back and forth affair stayed close as Fulton senior Dominique Minor, who finished the game with 11, scored a couple of buckets and Austin East workhorse Chase Jones pounded the offensive glass for put backs and kept possessions alive with his hard work, yet Fulton lead after 3, 47-45.

The fourth quarter belonged to Steele and Gallman. Steele would be named the tourney's most valuable player after the game. Gallman, who is being recruited by the likes of Marshall, MTSU, Eastern Kentucky and Clemson, is a special player with inate basketball instincts and above average IQ.

Chase Jones led the Roadrunners with 16, while his twin brother Chance finished with 13.

Joining Steele on the glitter squad were:

In the consolation game Carter survived a furious Alcoa rally to finish third in district 3AA with a 60-56 victory. Mighty Joe Meady led the Hornets with 23, while freshman Lester Wilson added 12 and G'Metrik Caldwell finished with 10. Sam Thompson led the Tornadoes with 22, while Taylor Brown finished with 11.