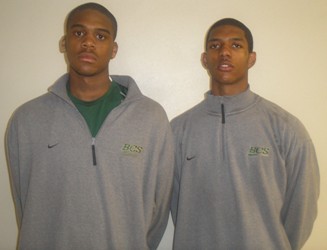 The place is Graves County High School in Mayfield, Kentucky.

The title implies Kentucky...First Kentucky Bank Shootout..but the guest list says the Volunteer state will be making their proverbial presence felt....dig it.

Four teams whose address fall within our state lines venture to the Bluegrass state for this prestigious event with visions of showing those guys who's the best.

Manassas, Braircrest Christian, Maplewood and Martn Westview will do their best to represent...Tennessee style.

The undisputed favorite to capture the gold ball in Class A heads to Kentucky with only a couple of games under their belt. Reginald Buckner (Manassas) is the go to guy and the Ole Miss signee has the forum to make this weekend his personal playground. Despite massive losses due to the cap and gown ceremony, the Tigers still have plenty of firepower led by Shaq Walker (Manassas) and freshman phenom Jo Northington (Manassas).

Fresh off a victory at the massively successful Marshall County Hoopfest, the Saints and their triumvirate of hoops success come to Kentucky to prove we play some pretty good hoops in Tennessee as well. North Carolina signee Leslie McDonald (Briarcrest Christian) provides the scoring and the much improved Johnnie Williams (Briarcrest Christian) has improved his scoring consistency. Williams, who has signed with George Mason, dropped 16 in the win at the Hoopfest including a couple of nice mid-range jumpers.

The leader of the pack for the Saints is senior guard Gregg Wooten (Briarcrest Christian). The 6'2 Wooten played well at the Fest and seems to like the Kentucky air, lets see if this translates into another solid outing. I think it will.

The Saints are prepared to defend their DII crown this season but some work in the Bluegrass should prepare them for the action after the holidays.

Out in Nashville, the Panthers are ready to prove they belong with the big boys. This opportunity should prove rich in excitment and progression. Robert Wade (Maplewood) is the leader of this group with his above average athletic prowess and much improved overall game. His maturity level has impressed us so much this past summer, he is consistent work on his ball-handling and shooting skills away from being a mid-major steal. Wade is joined by a nice cast of teammates including talented senior Joshua Lee (Maplewood) and Gerald Corlew (Maplewood).

And the Lloyd's have it.

Davell Lloyd (Westview) is the senior leader of this team. His defensive abilities are noteworthy and his offensive game is really coming around. He can shoot and is a pleasure to coach.

His younger brother Jacob Lloyd (Westview) is a lefty stroke artist who has no fear and ice water in his veins.

A good showing here could elevate them for some post Christmas success.

The remainder of the field reads as follows: