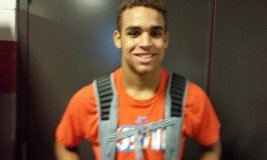 On the other side of the city of Indianapolis the EYBL had a league of their own featuring some Tennessee flavor including Team Penny and We All Can Go (WACG).

Team Penny had a good weekend finishing 3-1 moving their season mark to 5-2. Things started slow as Team Penny fell in their opener 75-49 to the powerful Team Final. P.J. Washington (Texas) led the scoring for Penny with 17 followed by Garland Smith (Mississippi) with 10.

Washington again led the scoring charge with 21 as Team Penny got on the winning side of the ledger 85-68 against the Playaz Basketball crew. Khalil Garland (Arkansas) added 14 while Parker Stewart (Union City) pitched in with 14.

It was Washington again dropping a 30 spot as Team Penny melted the Phoenix Phamily 92-77. Stewart chipped in with 20, Garland added 16 and Jarkel Joiner (Mississippi) added 10.

Team Penny closed this session with an 82-71 win over RM5 Elite. Washington took scoring honors with 21 followed closely by Garland with 15 and Joiner with 10.

WACG had a rough go of things in the first session finishing 0-3 so bouncing back was a neccessity not an option. Howard Pulley proved to a formidible opener as WACG fell to the Minnesota crew 92-73. John Petty (Alabama) led the scoring with 23 points followed up by KeyShawn Feazell (Mississippi) with 16 and Tyger Campbell (Indiana) with 15.

Petty dropped 26 as WACG recorded their first win in the EYBL spinning the Seattle Rotary 85-83. Feazell and Campbell each added 17 in the win.

WACG found the going rough as the Georgia Stars showed their dominance taking a 88-57 win. Campbell led the scoring with 14 followed by Grayson Murphy (Independence) with 13.

In the finale, the Southern Stampede bested WACG 88-71 ending their second session with an overall record of 1-6. Campbell led the scoring with 19 while Feazell added 13.

Darius Garland (Brentwood Academy) had a nice weekend playing for the St. Louis Eagles scoring 14 points against the New York Rens then scoring a game high 21 against powerful BABC. Silas Adheke (Hamilton Heights) also played well for the Eagles including a 10 spots against the Rens.