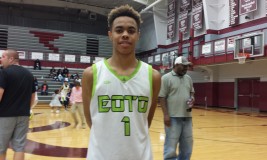 Two live periods in the books and several programs are flying high on the recruiting radar. Everybody pay attention to EOTO. Lets check out how this squad made up of kids from the East Tennessee area intertwined with some players from Georgia performed these past two weeks.

The first session of the live period saw the 17U EOTO crew invading On the Radar Hoops "Sweet 16" Session I. Invading maybe, dominating yes. EOTO finished 5-0 led by Xavier Bledsen (Georgia) who was consistently the top scorer and saw his recruitment rise with interest from the likes of UNC-Greensboro and Florida Gulf Coast.

Big weekend for Mehki Carter (Alcoa) who simply dropped bombs all weekend averaging double digits including a 20 spot in the win over the South Fulton Lions.

KeJuan Hale (Georgia) and Jarrell Rosser (Georgia) showed out all weekend as well. Hale, formerly from Knoxville, was a defensive stopper and used his lead guard skills to get everyone into their game and his team into its offense. Rosser was big inside and out, scoring in double digits almost every contest and being one of the squads top board getters.

Jack Sompayrac (Knoxville Catholic) fresh off his state tournament run, didn't waste any time acclimating himself to summer ball with his long range shooting prowess, including 12 in the title game victory.

EOTO 17U finished 3-2 in the second week of the live period closing strong with three straight victories.

Blistering start to the summer scene, the EOTO 16U squad came bounding from the gate in their opening event the D1 Specs Super 100 in Atlanta. Teahzjawon Hodge-Harper (Karns) brought home MVP honors with his play including a massive 19 point outburst in the title game 63-61 double overtime victory against the Atlanta Xpress finishing the weekend unblemished at 5-0.

EOTO came out 3-0 including a win over CP25, the Chandler Parsons sponsored squad. Harper led with 17 markers while Pember and Trent Stephney (Bearden) closed in on double digits.

Jaevon Gillespie (Greeneville) and Roman Robinson (Bearden) led a balanced attack with 14 markers each as EOTO moved to 4-0 on the weekend with a hard fought 75-62 win over God's Property Blue. Drew Pember (Bearden) and Shamarcus Brown (Bearden) added 10 points each in the win. Brown also came down with 13 boards.

The live period got back underway the following weekend in the Carolinas with the Phenom Hoops guys putting on another of their big time events.

Picking up right where they left off EOTO 16U gets off to a blazing start going 3-0 out the block behind Harper who was named game MVP in each contest averaging around 20 points per game.

In the semi's Harper, Robinson, Stephney and Pember were the scoring champions as EOTO bested Team United moving themselves into the title game against the Mooresville Magic.

EOTO found themselves down 17 in the title game before some inspirational coaching and focus brought the boys back together and they began chipping away at the lead. Connor Jordan (Morristown East) netted two charity shots giving EOTO the lead and they didn't look back taking home the crown. Harper led the scoring with 22 points and 11 caroms in the title game while Pember pitched in with 15 and Stephney added 10.

Do the math folks. Yes that 10-0 in the two live periods for the boys from K-Town. Great start to an important summer.

Meanwhile down Atlanta way, the EOTO 15U crew was winning titles of their own. 4-1 bringing home the Black Division championship at the Hoop Seen Atlanta Jam with a 45-35 victory over the Cherokee Spurs.

Thomas had himself a cozy tournament garnering MVP honors and averaging around 15.7 per game including 15 in the title game victory. Marable got his name on the ledger averaging around 15.5 per contest and leading the squad in boards at a cool 7 per. His weekend included a big 22 point game in a semi-final victory.

Jalen Geer (Knoxville Webb) had a very nice weekend averaging 10 points per game and being one of the tourneys top defenders. Uriah Powers (Clinton) flirted with a double/double all weekend and finished with 8 points per and 8 rebounds per contest as well.

Tevon Summers (Knoxville Central) had a big weekend running the show and providing leadership from the lead guard spot. He was big in the title game victory with 12 markers.

Overall I would have to say the first two weeks of the live period have been very good to EOTO. July will be gigantic for these teams and their futures.