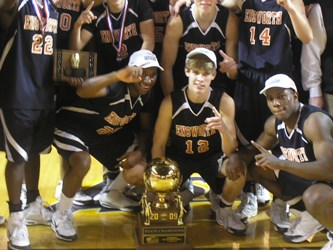 What a great way to finish up your high school career.

Taverres Jefferson (Ensworth) could feel himself igniting and once it became apparent there was no stopping him. The 5'9 senior guard bombed 31 points and helped lead his Tigers past Father Ryan 61-44 giving them the coveted gold ball and rights to call themselves the state champions of DII Class AA.

Connolly did all he could to lift his Irish scoring 18 points and grabbing 16 boards.