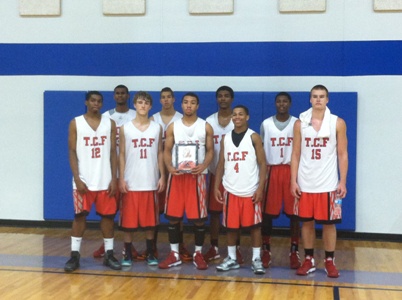 Atlanta was the sight for the On the Radar Hoops Elite 32 featuring a handful of teams from the Volunteers state. Lets take a peek at the action.

The Velocity made the trip down I40 and came away unblemished with a 3-0 mark. They opened things up with a 61-53 win over the West Georgia Elite behind a team high 14 points from Ryan Henry (Knoxville Catholic).

Levi Woods (Meigs County) took over the scoring honors in Game #2 with 17 as the Velocity overthrew the Georgia Dynasty 55-44. Merian added 14 in the win and another Isaac, Isaac Edmiston (Maryville) pitched in with 7 markers.

Snider led four players in double digits with 22 as the Velocity closed out the trip to Georgia with an 81-60 dismantling of the HESE Wolverines. Jack Graham (Bearden) pitched in with 16, Woods added 15 and Deonta Bizzle-Brown (Hardin Valley) added 11.

Woods led the squad in scoring average with 15 per game followed closely by Snider at 13.0, Merian and Graham finished with a double digit average at 10 per contest.

Coaches were very complimentary on the play of Henry, who controlled the tempo ad knocked down open shots; as well as, Austin Glasgow (Hardin Valley), who was the designated defensive stopper and made solid decisions with the ball.

Bizzle-Brown had his best effort of the summer, blocking shots and playing with effort on the defensive side of the ball. Graham knocked down shots, while Snider was the glue that kept the Velocity machine purring.

The Tennessee Chosen Few also came away from the Elite 32 unscathed but managed a fourth game to finish 4-0 on the weekend.

Justin Simmons (Stone Memorial) led the scoring with 17 as the TCF outsmarted the Scholar Stars 59-48 in their opening contest.

Devin Sibley (Karns) and Oterriah Lee (CAK) scored 16 and 14 respectively as the TCF captured game #2 a 65-56 win over the Atlanta All-Stars.

TCF made short work of the Atlanta Knights crowning them 72-23 behind 23 from Tyler Yoder (Stone Memorial). Luke Matthews (Stone Memorial) and Tre Fields (Virginia) each finished with 12 as the TCF moved to 3-0 on the weekend.

Game #4 was more of the same as the TCF doused the Atlanta Blazers 67-47 behind 15 from Yoder and a triumvirate of players with 11 including Simmons, Sibley and Tyleke Love (Dobyns-Bennett).

Another Tennessee squad, another undefeated team. The Tennessee Chosen Few 16 and under group raced into the Elite 32 and got things off on the right foot with a 71-41 win over the Burners. Jordan Bowden (Carter) and Kelvin Jackson (Fulton) took scoring honors with 12 each.

A second game blowout got the TCF prepared for a nice showdown with the Birmingham Ice Elite from Alabama. A tight game pulled out by the TCF late and a 71-66 victory to show for their efforts. Brady Nease (Union County), Patrick Good (David Crockett) and Jackson all scored 11 in the win.

Jackson was the absolute man notching 22 large as the TCF slipped past the Tucker Running Rebels 66-61. Durrell Middleton (Powell) added 16 in the win.

The young Panthers had a nice showing in the ATL finishing at 2-1. The Panthers got a dose of the sheer size of some of the Georgia groups as the Atlanta Express got the best of them 51-36. Tavares Hailey (MLK) led the scoring with 9 markers.

The Panthers regrouped behind 19 points and 14 caroms from Jake West (Hendersonville) and got past the Birmingham Ice 74-61. Hailey added 14 and Austin Kirby (Station Camp) finished with a dozen.

Austin Douglas (Cheatham County), John Pettway (Alabama) and Kirby all notched 14 points as the Panthers defeated the South Atlanta Knights. West added another double/double with 13 and 11.