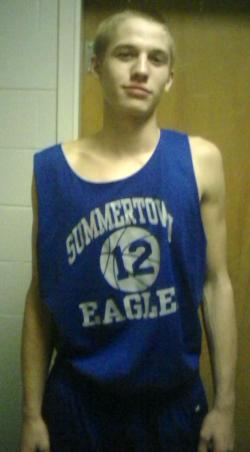 Plenty of action and excitement was the norm down in metro
Cornersville this past Saturday as a group of Class A teams combined with a
handful of Class AA squads took to the hardwood for the start of the 2009-2010
hoops season.

The play day marked the return of one of the states top
rising juniors in Kedren Johnson (Marshall County).

Having secured offers from numerous SEC schools including
Tennessee, Vanderbilt and Alabama and having a diverse recruiting scope
including an offer from Harvard, Johnson was more than ready to get himself
back on the floor.

His playing was limited in effect for numerous reasons, one
opponent had majority of their players till on the gridiron and not to rush
back and let fatigue become a major factor.

In limited action, the 6'4 point guard was very good with
the tempo of the game; he made crisp passes for easy scores and showed a much
improved jumper shot from the perimeter. His game time action will increase as
the week goes on and he gets ready for the start of the regular season.

Down from Pulaski, Coach Billy Holt and his Bobcats from Giles County
brought a veritable potpourri of youth and athleticism to the court. Leading
the way for the Bobcats was 6'4 forward Lance
Rivers (Giles County)
and Tamarius McKinnie (Giles
County), a 5'11
rising sophomore guard with a decent outside stroke.

One of the best shooters of the entire day also donned the
black for Giles County. Lake Jones
(Giles County) was unconscious from deep
the entire day, at 5'10 he lacks size but has the ability to find the open spot
and knock down the shot he will be a serious weapon for Coach Holt this season.

Joseph Wilkinson
(Huntland) was one of the more pleasant surprises of the day. The rising
senior guard has bounce, makes great decisions with the ball and can score off
a quick crossover or with a decent lefty stroke from outside.

Marion County makes the move down into the ranks of the
Class A and will be one of the stronger squads in the Chattanooga area. Led by senior Cody Henegar (Marion
County) this could be a very good
season for Marion
County. Henegar, who has
signed to play next season at UNC-Greensboro, was very good on the day knocking
down several mid-range jumpers and did a fine job controlling the boards. He
passed well from the double team and kept moving for easy put backs and a few
nasty dunks as well. Senior point guard Corpio
Brock (Marion County) showed a nice shooting touch
and played the two man game with Henegar very well. Brock played a football
game Friday night so his hoops game is a few weeks away, despite shooting the
ball very well.

Nick Walker (Nashville Christian) did his best Terrence Oglesby
impression knocking down big and tough threes in one of the days best games a
come from behind win against Perry
County.

Walker
bombed a three with: 45 seconds on the clock cut the margin to one and after a
steal he bombed another giving his squad the lead for good at 60-58.

Walker, a junior shooting guard, was very good on this day,
as was his running mate Dakota Priest (Nashville Christian).

In what will be a battle in the newly formed District 12A,
the top two squads Perry
County and Summertown,
although never playing each other, had very fine showings.

Perry
County had size and
outside shooting combined with a relentless defensive effort. Senior inside
players Will Averitt (Perry County)
and Christian Cunningham (Perry
County), both had a
lot of inside points with Averitt being the most active on the post entry catch
and score. Cunningham was a bit more active on the perimeter but did most of
his damage on the baseline.

Scoring from the outside came in the form of sophomore shooting
guard Cannon Rhodes (Perry County).
At a sleek, 6'3 he has the size to get off his shot and has a shooters mentality
for certain.

Over at Summertown, a trip to state last season has only
fueled the fire. Coach Trotter has his troops assembled and ready for battle,
led by rising junior point guard Bubba
Clifton (Summertown). Clifton
provided scoring, leadership and a general dislike for anyone on the opposing
team having the basketball.

He knocked down numerous threes but scored best off his
drives to the bucket where he finished with either hand or made the easy dish
to a happy teammate.

Several other squads were in attendance including Wayne County,
who was short football players and Forrest and Fairview, whom we did not get to watch for an
extended amount of time.