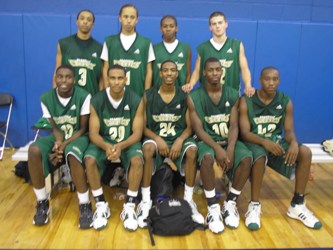 Casey Prather (Jackson Northside) was in the mood to put an exclamation point on this championship game.

With six minutes or so remaining in the River City Showdown 17 and under championship game the 6'5 rising senior crossed up his defender and flew to the bucket for a two handed devastatingly nasty flush.

The momentum seemed to be the spark to propel the Nashville Celtics past the Louisiana Future 84-77 and bring home the 'ship from inaugural event.

Good accommodations, a nice venue with courts close together made for a pleasant experience in Memphis.

Prather took it even one step further finishing with 14 points and walking away with the MVP award.

Ish Sanders (Cleveland) was the high man for the Celtics with 16. Meiko Lyles (USN) had a wonderful shooting performance and finished with 15. Mitchell "White Shark" Hill (Cookeville) added 13 and Austin Hollins (Germantown) finished with 11.

Andre Hollins (White Station) dropped 17 points and walked away with the MVP in the 16 and under division as the Memphis YOMCA burned down Da House 75-58.

Hollins was spectacular the entire week and was joined in the scoring column by his future Spartan teammate Nino Johnson (White Station)  with 13.

Nick King (Memphis East) scored 13 points and was awarded the MVP plaque as the Memphis YOMCA 14's (playing as 15's) defeated the Memphis War Eagles 62-52 in the 15 and under championship game.

Carlos Hart (Fayette-Ware) finished with 12 for the Y, while Dre'Sean Looney (White Station) and Johnathan "JIII" Williams (Southwind) each tallied 11.

Matthew Butler (Memphis East) led all scorers with 17 for the war Eagles, also a 14 and under squad playing up in this event. Markel Crawford (Melrose) and Josh Jones (???) finished with 12 and 10 respectively.

King was joined on the all-tournament squad by Williams, Butler, Austin Nichols (MUS) from the War Eagles and Sam Craft (Craigmont) from the Memphis Magic Elite.