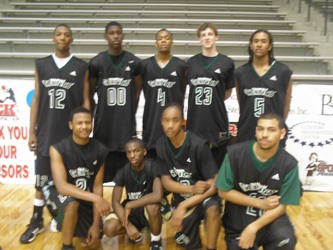 For those of you who did not have a big brother growing up the message of this story may not click for you, but those who did will understand immediately.

The Nashville Celtics 16's polished off big brother the Atlanta Celtics 51-35 to capture the 16 and under crown at the Real Deal in the Rock.

A perennial staple on the summer scene the Atlanta Celtics are the forerunner to what most programs strive to become.

Ray Parks (St. George's) seemed completely oblivious to the fact he was playing the older sibling as he dropped a game high 17 and picked up the slack for his injured comrad,  Kedren Johnson (Marshall County).

Parks scored on a variety of twisting drives to the glass, a couple of threes and some nice efficient foul line jumpers.

Levi Randolph (Alabama) played very well all wekend and culminated his efforts with 13 in the title game.

The catalyst to this Celtics squad was the play of diminutive point man Kendall Anthony (Liberty Tech). Ant scored 11 points but his ball-handling and decision making were key in this contest.

The Celtics relied on their core players with very little depth. Also playing well and ocntributing to the winning of the hardware were Whit Thornton (MUS), who played especially well in the semi-final game against the Memphis Hawgs and Cole Robinson (Hillsboro).

I must give some props to the aforementioned Memphis Hwgs who advanced to the final four of this event with players from the Bluff City not many have heard of before. This group coached by former Arkansas great Todd Day, thus the name,  gave effort and never quit.