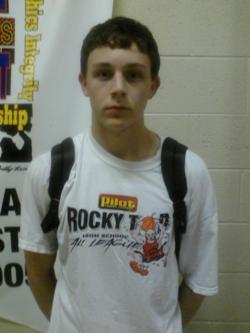 Saturday 131 players descended upon the campus of Carson Newman College for the East Tennessee Prep Hoops Rankings and Exposure Showcase. We start our quick evaluations of the players with the SEC.

Pass first point guard who combines hustle with tenacious on the ball defense. Must improve his outside shot and prove he can score.

Another tenacious defender who has a knack for scoring in traffic and has exceptional athletic skills must improve the consistency of his shooting.

Exceptional shooter who also plays defense with passion and aggressiveness, he has great hands and is not afraid of contact.

One of the best campers according to the staff, Jose was big on both ends of the floor and gave exceptional effort throughout the camp. Dominated inside like we knew he could.

Combo guard, who showed a nice outside stroke when set, must improve his strength.

Played with maximum effort to establish himself in the post, scored inside with ease.

Good outside stroke from the lead guard position, must learn to get his shot off quicker.

Fundamentally sound player, who understands the game, makes the right pass and is always around the ball.

Still getting into basketball shape after a year away for injury, Knox showed a devastatingly accurate jumper from the corner.

Showed leadership skills with a young team, was very effective using his ball fakes to get scoring opportunities, unselfish and able to score when called upon.

Combo guard knocked down some outside shots and played tough and smart on both ends of the floor.

One of the best on ball defenders at the showcase, he has a quick first step but didn't always finish

Low post presence that knows his role and scores with contact, rebounds strong and uses his body for positioning. He scores over either shoulder with equal success.

Young man showed a nice shooting touch, made aggressive cuts to the bucket and displayed a leadership quality.

Lefty showed a big time shooting stroke and scored on some unorthodox moves to the bucket. Distributed the ball well and used the glass when driving to the hoop.

Rising junior is a smart player who showed a nice touch from deep when his feet were set. Drove and scored off the dribble, work on footwork.

Started slow but came on late playing like the guy we have become accustomed to watching. At his best when he leads a team and distributes and defends.

Shooting guard/wing with good size showed he could use the dribble to get to the rim. He will need to improve his outside shot.

Gave outstanding effort in the drill work and continued to do so in the game action. Buck knocked down outside shots and showed his athleticism off the dribble.

Played extremely hard in the post including a posterizing dunk on a hapless defender, Nickles can shoot the mid-range shot and gives effort on defense.

Good shooter who understands how to play the game, solid passing skills and has range on his shot when his feet are set.

Excellent shooter with range also plays hard on defense and is an excellent help defender. Want to see him improve off the dribble and make that shot an even bigger weapon.

This young player plays the game with a hard nosed, student of the game approach on the floor. His effort and above average understanding will serve him well as his skills catch up.

Small point guard with good vision and the ability to make things happen off the bounce, Webb can shoot the rock if he has time and will need to improve his overall strength.

Sweet shooting youngster has great size for an incoming freshman but must learn to get into the flow of the game quicker and more consistently. Watch excessive dribbling.

Excellent defender uses his size and footwork to gain advantage against his opponent. Offensively he uses his body as well to score in traffic, must improve his stroke consistency.

Really has no defined position but has a knack for making tough steals and scoring from the foul line in. Shoots flat-footed and must improve his ball handling to become a guard.

Deep shooter knocked down several tough jumpers and played on the defensive end with passion and hustle. Passes the ball well and gets tough rebounds in traffic.

Consistently knocked down the outside shot and finished his drives to the bucket. Played unselfishly and gave effort on the defensive side of the ball. He is poised for an outstanding senior campaign.

Evaluation says "This guy is killin' folks". Holt was knocking down the deep and mid-range jumpers, snatching boards, making the right pass from the post and scored with an effective jump hook.

Active player showed some bounce with his drives to the bucket and proved he could knock down the outside shot if his fundamentals were right.

Plays under control and pushed the ball well in the transition situations. Has a good outside shot but must get stronger.

Great size for an incoming freshman, Miller showed a nice turn around jumper from the post and defender very well. Gets his hands on the ball and is very active.

System guy who gets the tough rebounds and important buckets at key moments of the game, Spencer works very hard on the glass and gets his fair share of offensive opportunities.

A very young post player who is still learning what he is capable of at this point, Coleman is effective on the glass and will get better offensively as he improves his strength and confidence.