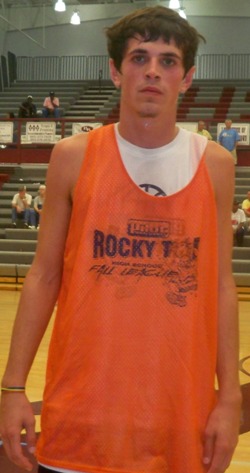 The final two from the ACC

Excellent ball handler with a good first step showed he could score off the dribble, dribbling a bit excessive and must improve his defensive effort, too good of an athlete.

Outstanding shooter, good length and decision making on the break or in the half court, Cross has an exceptional basketball IQ and plays at a comfortable pace.

Very athletic player who glides to the bucket and gives maximum effort on the defensive end of the floor, scores mostly off the bounce and in transition.

One of the better contested shooters in the camp, better athlete than he's given credit for and plays a smart game especially on the offensive side of the ball.

Small point guard who is very aggressive on the defensive end of the floor, a very good on ball defender especially out front, working on his offensive game, tough kid.

Strong wing player who plays with an attitude that carries over to his defensive effort, Jordan will need to improve his offensive package.

Thick youngster goes hard to the basket and absorbs contact well, can shoot the outside shot and plays with passion; he needs to slow down and let the game come to him, slow down.

Active young player showed a very natural athleticism, played his best when slashing to the bucket, needs to work on a consistent outside shot.

Showed a penchant for grabbing the tough rebound, especially for a guard, played his game in constant motion, must improve his outside shooting.

Slick lefty point guard with handles and a bouncy athletic gait, showed he could shoot the ball and was especially effective slashing to the glass and dropping the sweet dish to his teammates. Excellent vision gave him an edge.

Skies high for rebounds, blocks shots most can't get too and is a "butcher" when he gets in the open court flying to the rim, Barber needs to work on his handles and a more consistent outside stroke, he has a very bright future if he works at it, very bright.

Thomas is exactly what you would expect from a Fulton Falcon, he is hard nosed and tough as can be on defense, his outside shot is good and when he works on his handles so he can add something off the dribble, his game will grow exponentially.

Bouncy, underrated athlete, who goes high for rebounds and will finish the play with a flush right in your grill, he needs to give a more consistent effort at all times and use the gifts he has been given, I think his best hoops are in front of him, just you wait and see.

Tall and thin player who needs to develop upper body strength and hand strength to become more effective, he has a knowledge of the game but lacks the physical skills to make the plays he can clearly see happen, added strength will add confidence as well.

Young guard still trying to find his way against the older players, the effort is without question but the skill level needs continued work, work on his decision making with the ball and his handles as he grows into the point guard role.

Smith is the defender every offensive hates to see, he's in your face from start to finish, quick and lefty, solid off the dribble and showed a leadership quality for a young squad he was in position to lead, work on the rotation and fundamentals of his shot.

Played with effort and was active around the ball, shot the ball ok but must learn to get the shot off quicker against the better atheletes.

Young guard also showed a decent outside stroke but tended to play too fast to accommodate his opponents; once he slowed his tempo his production was much better.

Another youngster who really had a nice stroke, but needs to work on getting the shot away much quicker as the athletes he plays against become stronger and tougher, he proved he could score the ball and played with passion.