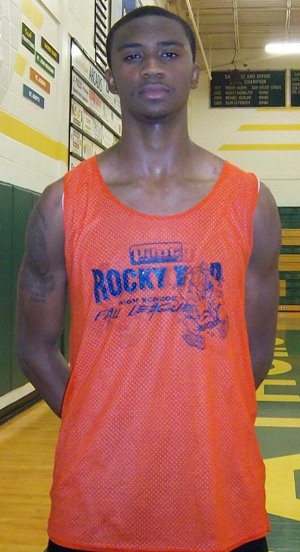 Small point guard showed some quickness and lateral skills on the defensive end of the floor. Williams had a propensity to dribble a bit too much without making any progress towards the goal. He showed the ability to make good decisions when his head was up and could develop his offensive more to become a weapon on that side of the floor.

Tee has a decent outside shooting touch but needs to get the ball off quicker against more aggressive defenders. He tends to lay back on the three-point line instead of using his length to create some scoring opportunities off the dribble. He must work on his decision making with the ball and correct a tendency of turning his back to the action while on defense.

Very athletic youngster who needs to refine his skills, Hairston was solid in transition when he ran the floor and finished off the pass but needs to work on his handles in the half-court setting. His outside shot needs form work but he is an aggressive defender who rarely gets beat when he sets his mind to stopping his foe.

Reminds me of a young Dane Bradshaw with his ability to grab rebounds he has no business getting, making passes no one else sees and providing strength and leadership while on the floor. Schmidt has a decent outside shot and finishes very well when going to the cup. He needs to tighten his handles if he wishes to play more guard and keep the ball closer to his body.

Youngster has improved his overall game a great deal in the past year, Jalin has mad handles and can break down most defenders with the dribble. He has good size and is a willing defender. He must improve his outside shot, which is not bad, but needs to become more confident with this as a weapon as teams start to scout him more heavily. The improved outside stroke could determine what level he ascends to after high school.

Showed great court awareness and always seemed to be around the ball, Jake plays very hard and obviously has been well coached at this point in his development. He has a decent outside shot but will need to work on his lateral quickness and foot speed as he moves along in the high school ranks.

Determined young player knows how to score and has shown the ability to knock down the outside shot. His confidence will rise exponentially as he gets physically stronger and can use his aggressive manner to take foes off the dribble. He plays with passion and defends very well for his age group.

Excessively quick youngster excelled on the defensive side of the ball with his footwork and decent size. Campbell needs to improve his offensive repertoire as he readies for his junior campaign. He needs to work on his outside shot and improve his skills off the bounce to become a more complete player.

Big guy has made immense strides in the past few seasons, improving his footwork and his ability to finish on the interior. He still has heavy feet at times and needs to improve his rebounding and boxing out positioning. Using his size to his advantage on the interior will make Sam a much more productive player in his junior season.

McGill has improved his effort and thus made himself a much more effective scoring option. He has good size and plays very aggressive which serves him well on the defensive end of the floor. He can score off the dribble and has improved his outside shot as well.

Very good mid-range shooter who has a shooter mentality when possesses the ball, Kyle needs to work on his ball-handling and improving his physical strength to finish some of his drives to the bucket. He uses the pump and ball fake very well but sometimes cannot absorb the contact to finish his drive. This youngster should have an outstanding senior campaign.

Undersized inside player gave maximum effort on both ends of the floor and made his bread and butter on the offensive glass. He battles for every rebound and plays with abandon. He will need to work on his shooting and ball skills as he progresses so he can provide some perimeter minutes in the future.

Very nice outside shot that just needs to be released a bit quicker along with the ability to score from mid-range make Carter a solid contributor. He tends to spend a lot of time on the three-point line despite his size and ability to score inside over weaker foes. He has good feet and is still finding his groove after some injuries.

Park has a point guard mentality and will make some nice passes or take his opponents off the dribble and finish yet he tends to over-dribble and makes questionable decisions with the ball at other times. Consistency will help him as he enters his junior season. He has adequate size and must work on his quickness and foot work as well.

Highly improved scorer who has a nice shooting stroke and always seems to find ways to score, Jacob will needs to quicken that stroke as teams scout his release and he will need to add more action off the dribble, which he is more than capable of doing. He needs to make sure to control tempo and not go to fast. He functions better in a more structured setting as he is a fundamentally sound player.

Ross is a hard nosed, despite slight, young player who can really score the ball. He has a deadly outside stroke and is quite capable off the dribble and fearless going to the rack. He will obviously need to improve his strength but he will attack none the less. He plays tough defense but gambles a bit too much at times. He has a high basketball IQ and as he matures will be one to watch in the freshman class.

Improving big guy has made gigantic strides each season he has competed on the high school level, Elliott is a hard nosed kid who just needs footwork and offensive skill drills to make himself a better prospect for the next level. He is a lefty which usually spells an advantage inside. As he grows in confidence with his scoring ability the sky is the limit for his potential.

Big Josh has made some strides in his game, able to use both hands on the inside, he is much more active and obviously stronger on the glass, and he has confidence in his baseline jumper and is running the floor much better. He still needs to work on his footwork which will help him inside as he guards on the interior.