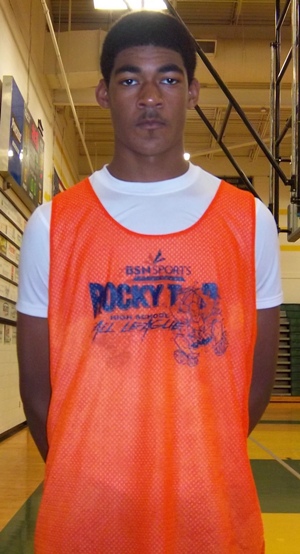 Very heady senior point guard showed some nice passing skills and was much improved on the defensive side of the ball. He put good pressure on the ball defensively and loves to run and start the break. Roper moves well without the ball, relocating after the interior pass putting him into scoring or passing position. He will need to improve his outside shooting and become a bit more of an offensive option for his squad.

"He can flat out play" was one evaluation for the Murfreesboro rising senior product. Dowdy was a big surprise with his all around game, he made excellent decisions with the ball, great ball fakes, shoots the ball with range, showed a floater in the lane and played well with pressure. A long thin athlete he will need to add some strength to help with his drives to the bucket but he was certainly the biggest surprise at the showcase.

Much improved offensive player who seems most comfortable moving towards the interior of the lane to use his short jumper or a variety of inside moves to score easy buckets. He is good at following his shot inside and getting easy put-backs. He will need to continue to work on his ball-handling and becoming more comfortable playing on the perimeter. He has good size and strength which allows him to compete inside and he is adept at coming off the screen and looking to score.

Young player with a major upside, this kid has a chance and as he matures will need to understand that playing hard and having a motor will benefit him as he gains strength and skill. Long athlete, Fears is obviously still learning the game and as he realizes his potential he could be a very nice player in Upper East Tennessee. He will need to work on his skill level, ball-handling, shooting but as he does keep an eye out for him, he will be good.

Good passer, decent handles and made good decisions with the ball. He made easy plays for his teammates and has quick hands on defense. Offensively he really needs to work on his shooting form, release and rotation especially. Small guard in stature has a high basketball IQ which will help him against quicker and bigger athletes.

Young man has a motor and plays hard especially runs the court well and has some athleticism getting off the floor. He is a good passer and showed he could finish with either hand going to the bucket. He will need to improve his overall skill level especially from the outside with his shooting stroke. He has a high basketball IQ and as he improves his lateral quickness and explosion could be a very effective player at the prep level.

Young man showed he could shoot the ball when he had time from mid-range. He struggled with the athleticism from some of the other players and will need to work on his overall skill level. He needs to work on his lateral movements and decision making with the ball as the game definitely got speeded up for him on this level.

Every single evaluation basically had the same message for the rising freshman which was be more aggressive. Positive comments from everyone included runs the floor well, gets open, knocks down open shots, please get him more looks, you get the picture. As a youngster it's hard to command the ball just know to pick up the intensity level and lots of good things will happen.

Fundamentally sound lefty has improved his overall game adding the mid-range and deep three with much more consistency than in the past, Isaac continues to be at his best inside using head fakes and solid back to bucket moves and expert footwork to get buckets. He remains an undersized interior player who will need to work on his ball-handling, mid-range and passing skills as he makes more of a transition to the perimeter.

Quintessential point guard is quick with the rock and makes the transition from defense to offense in a timely manner. Will is slight of build but plays with a constant motor and has an unselfish demeanor. He is a pass first kid who has shown a much improved offensive stroke this season. He has trouble with bigger stronger guard but not from a lack of effort standpoint. He will need to tighten his handles and become more of an offensive threat for his game to grow.

Was hampered a bit by some nagging injuries, Glasgow is a thick point guard who shows good handles and has a pass first mentality despite his penchant for making the dramatic play when the easy pass would certainly suffice. Very good interior passer and cutter, Austin tends to over-dribble at times and must get back on defense regardless of the offensive outcome. He has improved his scoring and is finishing much better off the dribble.

Hard worker plays with a constant motor. He can knock down the outside shot if given time to set his feet and is a better athlete than he appears. B.J. will need to improve his ball-handling and must play with better balance on the court. He is a high basketball IQ kid who will battle from buzzer to buzzer. He will need to quicken his shooting delivery as well as he competes against bigger and more aggressive athletes.

Sneaky quick guard plays baseline to baseline and runs the floor to get quick scores. He is a good shooter but will need to get more lift on his shot as he is a stand still shooter. He will need to improve his defensive skill set as he is much too good an athlete to be an average defender. He possesses soft hands and catches everything thrown his way.

This young man has no idea how good he can be on this level. He has skills which each evaluation described as cleans up the glass, good active hands, works for position, very good post presence, good passer out of the double team and a nice job gathering himself inside after contact. Very positive feedback to say the least, Roberts is scratching the surface of how good he can be. He will need to bring this aggression to the floor for every possession and go after every rebound and block shots and continue to make the strides of improvement we have seen this summer.

"Watch this kid", was a direct quote from a former college coach describing young McCurdy. He has some natural leadership aspects; he can run the show but does like to score. He has terrific range on his outside shot and possesses the floater which every small guard should have in their arsenal. He just needs to let the game flow and not worry about making mistakes, in basketball we move on and go to the next play. He is fortunate to be coached by one of the best in the state and I think you will hear a lot about this young man in the near future.

Athletic kid who plays with fervor and is in constant motion, he pushes the ball hard up the floor and makes the transition from defense to offense very quickly. He is a staunch defender and uses his size to create havoc for his opponent. He is always in attack but will need to temper some of that as he improves his skills on offense and plays with more tempo and poise. He needs to work on his shooting and ball-handling.

Long and deceptively athletic wing, Isaac showed he could play inside and out. He showed very good back to basket post moves and was used as a pick and pop four man adapting to that role in the half court set. He has a good stroke from deep and is ball-handling skills away from being a match-up nightmare from either the three or the four spot at the prep level.

"Work horse" was one description of this rising freshman as he proved to be a valuable teammate and productive player at the showcase. Taylor plays with heart, he boxes out, can score some in traffic, he will defend and he is a glue guy which every coach in the country wants on their squad. He will need to work on his skills including shooting, ball-handling and lateral quickness as he tries to find a position on the floor to excel.